Pittsburgh Steelers rookie outside linebacker T.J. Watt had quite a showing in the team’s 20-12 preseason opening win against the New York Giants as the first-round draft pick out of Wisconsin recorded five total tackles and included his first two sacks.

Watt, who led the Steelers defense in total snaps played Friday night, also earned the highest grade of any player in the game (86.1), according to Pro Football Focus. 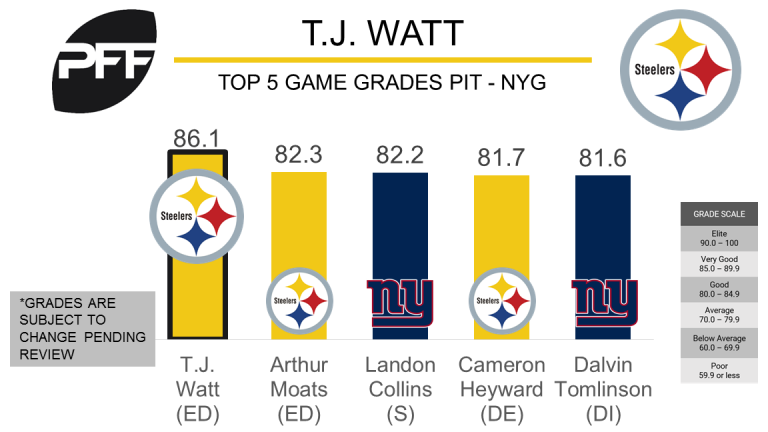 The stat sheet looks spectacular, and there’s nothing wrong with making the plays that come your way, but Watt’s six total pressures (including two sacks) and batted pass are inflated a bit, as was his 25.0 pass-rush productivity mark. His first sack was of the clean-up variety as QB Josh Johnson was flushed his way and the second came as an unblocked rusher to an overloaded side of the pass protection. Still, it was an impressive debut for Watt who also had a couple of nice rushes against fellow rookie, OT Adam Bisnowaty, while also picking up a run stop.

“I wanted to get out there and show I can rush the passer and make impact plays,” Watt said after the game when asked if his first preseason action went as well as he thought it would. “I think as an outside linebacker in a 3-4 scheme you’re expected to make some plays in certain moments.

“I just wanted to go out there and put on display what I’ve been doing for the past few weeks in training camp.”

Watt saw action at both right and outside linebacker Friday night and Steelers head coach Mike Tomlin explained the reason why that happened after the game.

“We were just short on bodies. Often times, that’s the case. It provides the opportunity to guys to show their versatility,” Tomlin said.

Fellow Steelers outside linebacker Arthur Moats also had a solid showing Friday night as the veteran recorded three sacks in addition to an interception. He received a grade of 82.3 for his performance from PFF and this is what they wrote about him.

Moats played 400 snaps for the Steelers a year ago and his vying for a role as a versatile backup once again this season. He got in on three sacks to go with two more hurries and he was in the right place at the right time to pick off an errant pass from QB Geno Smith. Moats also missed two tackles, a rarity for the James Madison product as he’s missed only nine of his 162 career tackle attempts.

After the game was over, Tomlin was asked to comment on Moats’ showing and if he’s an under-the-radar player.

“To be quite honest with you, he did what we was supposed to do,” Tomlin said. “He was like the 11th grader in the JV game there at the end. He’s supposed to dominate under those circumstances and he did.”

A multiple sack night for the youngest Watt brother.