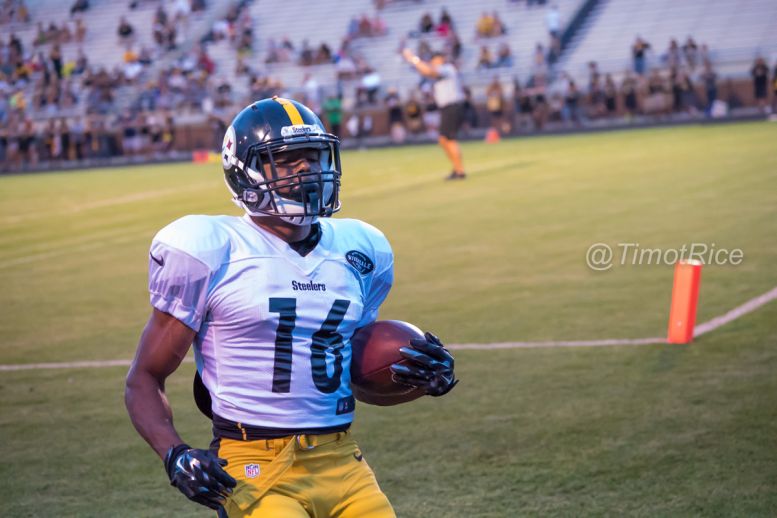 Should be an interesting day of practice. First time there’s been a Pittsburgh Steelers’ training camp at Heinz Field. Not really sure how it’s going to look or feel or how many fans will attend. Practice is slated to begin around 6:30 PM so expect another late final practice report. And no podcast until Monday. All that said, here’s what I’m looking for.

– This applies for all positions but QB comes first. It’s the final day of a five day stretch of practices, the longest such stretch of all of training camp. Guys are tired, guys are anxious for their first game. Practices have been clean. Not a ton of drops, I don’t think any fumbles yet, and things have been efficient. But the group has to finish strong and play like they’re fresh, even when they’re not (and they aren’t).

– Not a lot else going on at the position we haven’t talked about/explored/had answered. Thought Ben Roethlisberger had his best practice yesterday, even if he threw his first interception.

– Brandon Brown-Dukes needs a good practice. He’s not as twitchy or explosive as Trey Williams and obviously not as big as Terrell Watson. Had a rough day yesterday. A fumble, two drops in positional groups, and hasn’t done much special in drills. Not a lot of time to turn it around. Reps are scarce.

– More of the same from this group. Xavier Grimble has made a couple of receptions in the red zone but still hasn’t had that big play downfield.

– Might try to focus a little more on Phazahn Odom as a blocker. Better on the sleds, let’s see him in team session. He’s an easy mover as a receiver and quick to the tuck but has dropped too many easy ones.

– Hoping Bart Houston and Canaan Severin get on the same page. Hooked up down the seam on Friday Night Lights but have missed several other times, some miscommunication issues.

– Demarcus Ayers has made plays across the middle but hasn’t done much vertically. Maybe they run a slot fade or something.

– Dave and I talked about Ethan Cooper on last night’s podcast. Probably time to try to get a more complete evaluation on him. Like we also discussed, could be tough decisions on the practice squad. Pick two of these three in the comments: Brian Mihalik, Ethan Cooper, Matt Feiler.

– Injury situation on the OL. Mike Matthews can’t miss much time, either. We’ll see if he’s out there this evening.

– B.J. Finney has had a tough couple of days. Needs to be stronger at the point of attack in the run game. Get out of his stance quicker and anchor/drive.

– Francis Kallon popped up in my team notes for pretty much the first time yesterday. Release of Nelson Adams opens up some snaps for him. Gotta take advantage.

– L.T. Walton someone who is having a decent camp but I haven’t devoted a ton of time to paying attention to him. Definitely worth checking out.

Not sure who on the roster might go if they have to make a transaction. No one position that is overloaded. Two possibilities: Brown-Dukes (especially with James Conner close to a return), or a safety (Malik Golden).

– For those healthy, only T.J. Watt is a guy we gotta learn about.

– Have a good idea of how Tyler Matakevich, L.J. Fort, and Steven Johnson are. Other guys worth checking out are Keith Kelsey and Matt Galambos. Kelsey does appear to be the better athlete of the two but Galambos has made more plays.

– Only Greg Ducre seems to have a chance to return tomorrow of the injured cornerback group. Brandon Dixon has good hands (picking off passes), Mike Hilton good ball skills (breaking up passes).

– Assuming Artie Burns remains out, Ross Cockrell will have a heavy dose of Antonio Brown again. Good for him to get those reps, too.

– And Coty Sensabaugh will face Justin Hunter. Former Titans’ teammates going at it. He’s had a nice camp.

– Same thing as inside linebacker. Want to get to know the back end of the roster. Terrish Webb, Malik Golden. Jacob Hagen has been fine but a big day would be helpful for him. Ensure a spot on the practice squad.