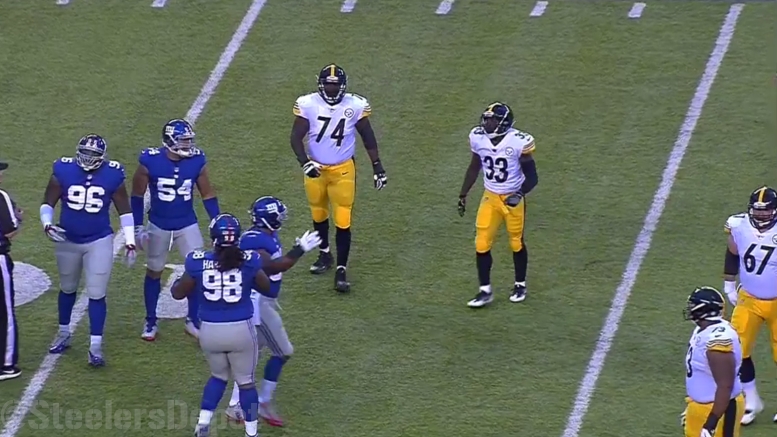 We don’t always get the opportunity to learn a great deal in the way of concrete information when it comes to watching preseason games. By their very nature they do not necessarily reflect the way that things will unfold during the regular season, as roster battles and schemes are in a laboratory phase.

But one thing that seemed to be apparent in the Pittsburgh Steelers’ preseason opener against the Giants is that, unless something changes, they are planning to utilize fourth-year offensive lineman Chris Hubbard as their swing tackle to back up both tackle positions for the 2017 season.

That probably was not necessarily the plan. After all, they used a fourth-round draft pick last season on an underclassman in Jerald Hawkins for whom they have had high aspirations. But in his second season, so far, even Bob Labriola has acknowledged that the LSU product has not had a good training camp—and the preseason debut was no better.

Hubbard was a natural tackle in college, but due to his size—he is still listed at under 300 pounds, officially, though that likely has changed—the Steelers initially kicked him inside to guard, and he spent most of his first two training camps working at guard.

They gradually began to trickle in more and more work at tackle, and then even at center, to the point where the team now views him as a five-tool lineman, so to speak, capable of playing any of the five positions along the line in a pinch, plus also serving as a tackle-eligible tight end.

Now, before you ask, yes, I already have a film room session planned to take a look at some moments from Hubbard’s performance during the preseason opener, but I think the very fact that the Steelers chose Hubbard over Hawkins to start at left tackle with Alejandro Villanueva out already speaks volumes about how they see the situation sorting out.

In truth, I thought that the former undrafted free agent handled himself overall pretty well against the Giants, and he spent much of his time working against Olivier Vernon. He has looked rough at times over the course of the past two preseasons working at tackle, but that wasn’t really the case on Friday.

Nor was it the case during the three games that he started at right tackle last season as an injury replacement for Marcus Gilbert.

Being able to play right tackle does not necessarily mean that you will also be able to handle the left tackle position as well. While it is true that the quality of pass rusher either side faces has gotten balanced over the years, the transference of the skill set from one side of the other is not always a smooth one.

I will be looking forward to seeing Hubbard get more work at left tackle during the preseason, but I also want to be sure that he also gets work at guard and center, which has not yet been the case this year. Perhaps they want him to focus on tackle, though, with B.J. Finney the top interior reserve.