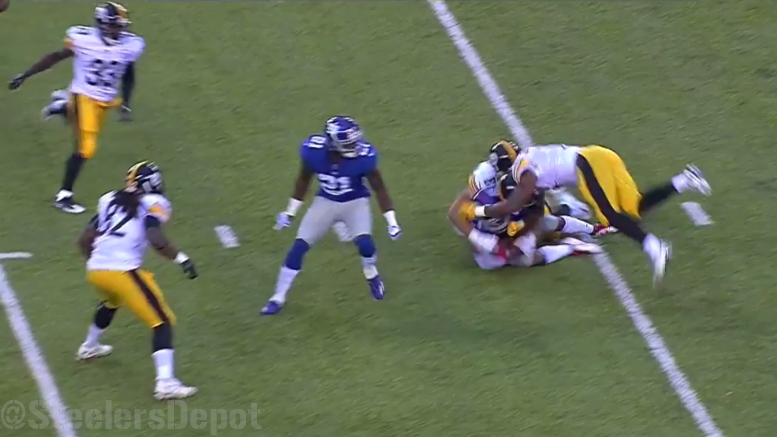 While he will not be out on the field tomorrow with his teammates, Pittsburgh Steelers rookie wide receiver JuJu Smith-Schuster still figures to be an important part of the offense this season. It remains to be seen how much time he might miss with a bone bruise—perhaps just a week—but while we wait for the next game, it wouldn’t hurt to take a look back on his debut, even if it was a rather brief one.

He only played a relative handful of snaps, but those that he did play proved fairly active. He touched the ball just twice, but he was incorporated into a lot of movement, including the first play of the game, in which they used him as window dressing to set up other plays later on, motioning him from far outside the numbers to across the formation to suggest a jet sweep.

On the second play, the Steelers aligned him as a wing off the ball, like a tight end. At the snap, he ran across the quarterback’s front as he showed play-action. As Joshua Dobbs rolled out to his right, Smith-Schuster slipped out toward the flat for an easy catch-and-run, though it only picked up four yards.

The Steelers failed to convert on third and long, but it didn’t take him long to touch the ball again. After going vertical on first down, the offense took advantage of the threat of the jet sweep shown earlier and actually ran the play. It was executed well with David Johnson’s lead block, Smith-Schuster showing purpose and fluidity—and suddenness and glide, if you get the inside joke—to pick up nine yards.

The offense failed to convert on third and one, however, and the would have just one play left on the day thanks in small part to Dobbs, and in large part to himself. The rookie quarterback threw an interception on the first play of the next drive.

Smith-Schuster, the eager beaver that he is, decided not only that he would make the tackle on the returner…he would somersault into him to make the tackle. In doing so, he collided with a teammate also attempting to tackle the returner and ended up giving himself what the team later ruled him out of the game for as a concussion.

Fortunately that didn’t cause him to miss much practice time at all, as he was quickly cleared, but soon after he suffered yet another injury, his third since training camp opened, though fortunately none of them have been serious. But it will be interesting to see how much playing time he might get, should he be healthy, in the third preseason game.