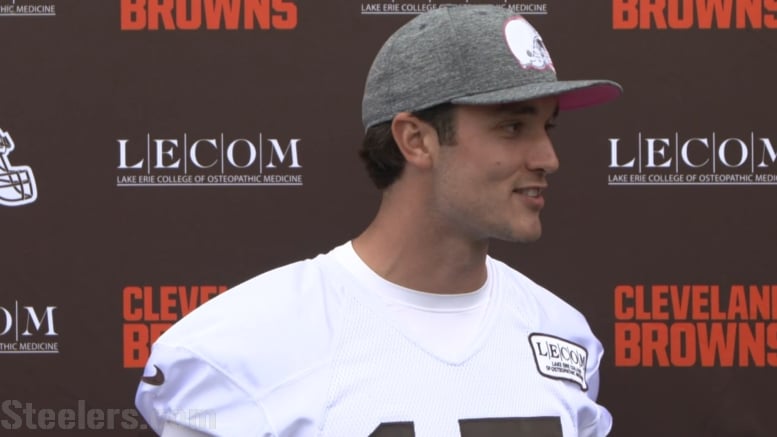 My, how things can change rather quickly. It was just less than a week ago that reporters around the Cleveland Browns were glowing about rookie quarterback DeShone Kizer. One of them wrote regarding the three-way quarterback competition that “it’s not even close”.

Yet after a few days of uninspiring practice performances, on the whole, Browns Head Coach Hue Jackson announced that Brock Osweiler was going to get the opportunity to start the team’s first preseason game, while also noting that the competition for the starting job remains ongoing, and that all four quarterbacks were going to receiving their playing time.

In a statement, the head coach said that “a lot goes into our evaluation, but it’s always going to be about efficiently and effectively running the offense. You want your starter to be able to do that despite any circumstance”.

I previously wrote that it has been Cody Kessler and Kizer who have been running with the Browns’ first-team offense, and Jackson cited that as one of the reasons that he wanted to give Osweiler the opportunity to start this game.

“Brock hasn’t really gotten any first-team reps, and this will give him that chance”, he said. “We look forward to seeing what he can do with this opportunity throughout the week and against the Saints”.

This was not a decision that came completely out of left field, as Jackson talked about the possibility of Osweiler starting. “We have a veteran player that’s played in games, knows how to win, and I need to give him an opportunity to demonstrate that”, he said late last week. “We still have some young quarterbacks that need to play a lot of football. You know if I stuck one of those other guys out as the starter, they weren’t going to play a lot of football. Because they’re probably going to come out with the other vets”.

In other words, in this particular scenario, starting the preseason opener does not equate to being locked in to start the regular season opener, though it remains very much a possibility. But for now, it’s just about giving the veteran the opportunity to try to take the job and to favor playing time for the younger quarterbacks who need it more.

“When you sit down and think through it all, you think what’s best for our football team; it’s best for me to trot Brock out there, see if he can go lead this offense and lead the team, and in the process keep getting these young guys more reps of playing football. They just need to play”.

One of these guys is going to face the Pittsburgh Steelers at the start of the regular season. They have faced both Kessler and Osweiler before, the latter with the Broncos two years ago, so it will not be unfamiliar territory unless the rookie wins the job.