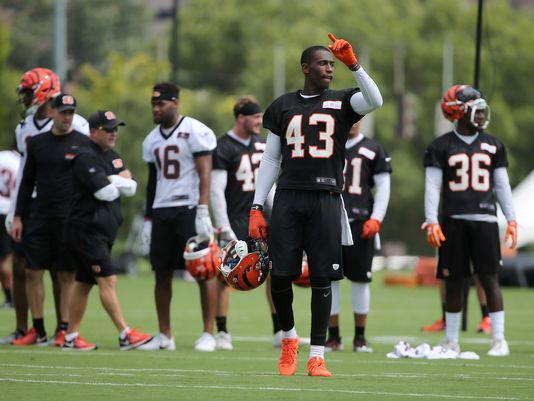 You may have noticed that the Pittsburgh Steelers had a number of players on Sunday who failed to complete the session during their first padded practice. A couple of them were dealing with heat-related issues, but others had bumps and bruises of a variety of descriptions that prevented them from leaving under their own power.

That is the nature of training camp, and something that virtually every team in every year has to deal with. Such as the Steelers’ rivals, the Cincinnati Bengals, who saw two of their safeties leave the field on a cart on the same day, including one of their starters.

While it is not believed that either injury is particularly serious, neither safety was on the field for the Bengals yesterday. According to Adam Caplan, the results from an MRI on the knee of starter George Iloka revealed that his ligaments are intact, but, at the time of this writing, the full results were still being evaluated. He is expected to miss a few weeks.

In addition to Iloka’s injury, third-year safety Derron Smith also left the field on a cart on Sunday, and he, too, did not suit up for yesterday’s practice. Down two players at the position, the Bengals signed an additional safety, Cedric Thompson, to their 90-man roster.

Thompson, a former fifth-round draft pick of the Dolphins in 2015, has spent time with the Dolphins, Patriots, and Vikings, but had not been on a roster since he was waived by Minnesota following the 2017 NFL Draft. He has yet to spend time on a 53-man roster.

Smith was drafted by the Bengals in the sixth round in 2015 and has been on the 53-man roster since then, active for all but four games and making 12 tackles over the course of the past two seasons, with the majority of his time coming on special teams.

As for Iloka, he is the team’s top safety entering his sixth season after being a fifth-round draft pick in 2012. He has been a full-time starter since his second season in 2013, and he earned himself a nice contract extension a couple of years ago.

With the departure of Reggie Nelson last year, Shawn Williams entered the starting lineup in 2016, and is the top safety on the practice field right now with Iloka out. Down to just four healthy bodies, I am presuming that second-year safety Clayton Fejedelem is running with the first-team unit at the moment.

Other Bengals notes: DE Michael Johnson has not practiced for the past three days. RG Andre Smith worked yesterday on the rehab field. QB AJ McCarron also did not practice.