If there is one player on the roster of the New England Patriots other than Tom Brady who has had the Pittsburgh Steelers’ number over the years, it is tight end Rob Gronkowski. The 28-year old All Pro tight end who played high school football in Pennsylvania has made the Steelers defense look very high school-like over the last seven seasons. 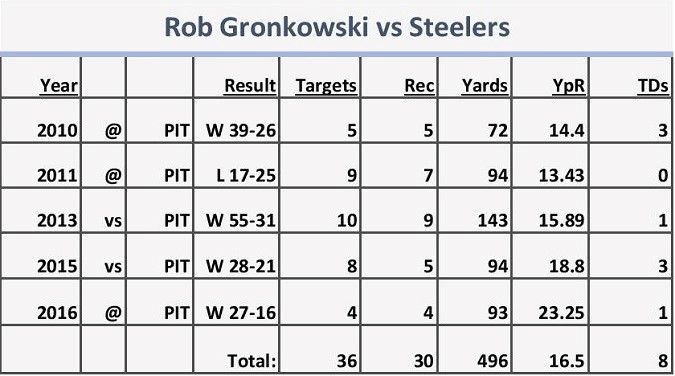 Gronkowski’s numbers against the Steelers look similar to the effect of activating game breaker in the old NFL Street video game series. And to be truthful, that is what it has looked like on the field as well, as the Steelers have had no answer for the Patriots’ tight end since his 2010 debut.

30 – The number of receptions Gronkowski has recorded against the Steelers, tied with the Denver Broncos for the most against any non-AFC East opponent.

496 – Receiving yards against the Steelers, the most against any non-AFC east opponent. Also, the same amount of receiving yards Gronkowski has recorded against the Cincinnati Bengals (263), Baltimore Ravens (45) and Cleveland Browns (188) combined.

8 – The amount of touchdowns Gronkowski has scored against the Steelers, only trailing the Buffalo Bills (11) for the most touchdowns against any opponent.

The Steelers have tried to put an end to the Gronkowski plague with a few different strategies over the last couple seasons. In last season’s matchup, the Steelers assigned safety Robert Golden onto Gronkowski and by halftime the Patriots’ tight end had just one reception for 13 yards. The second half was a different story though as Gronkowski recorded 3 receptions for 80 yards along with one receiving touchdown as he overpowered Golden with his efficient route running.

While Golden struggled to hold Gronkowski over the course of 60 minutes, his effort was not completely negative in the grand scheme of things, especially when you consider that the Steelers did not even bother to cover Gronkowski at times during the 2015 season opener.

But fretting over the past is neither here nor there, as the only date of relevance for the Steelers and Gronkowski is December 17th, when they will meet again for their Week 15 matchup.  This matchup is one of special importance as the Steelers look to inject more man coverage into their defense this upcoming season.

This brings the question to the table of who will get a shot at locking down Gronkowski come December 17th. Will the team once again turn back to Golden to hold down the unstoppable force that is Gronkowski, or look for a new approach such as safety Sean Davis or even the mammoth 6’3 rookie cornerback Brian Allen. Coordinator Keith Butler will have his work cut out for him but as the saying goes, perhaps the third, fourth, fifth, sixth time will be the charm for the Steelers defense.