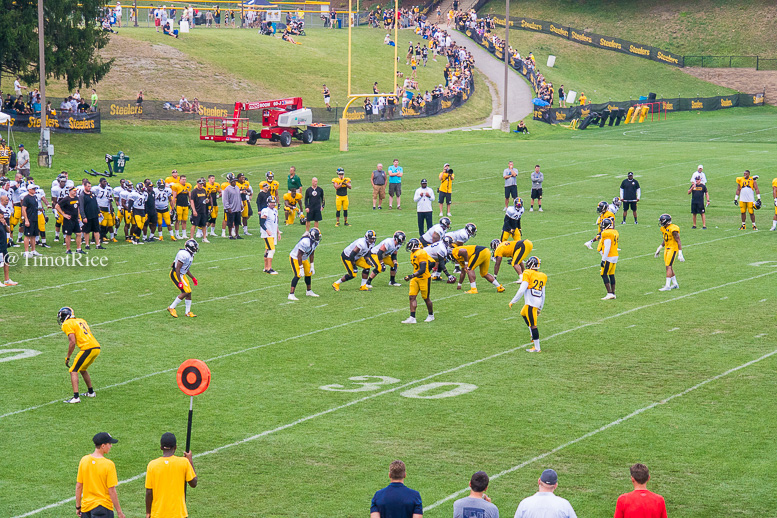 Welcome to the best day of the year. For me, at least, and maybe you as well. Football has returned with the Pittsburgh Steelers trotting down St. Vincent’s stairs to Chuck Noll Field a 2:55 PM practice.

If you haven’t been around the site before, we’ll be there throughout camp, taking notes and tweeting out the important things that happen each practice. You can follow me on Twitter, @Alex_Kozora, for live updates.

Keep in mind these first two days of practice are in shorts and shells so we’re not going to learn a ton about individual performance over that time. I am more interested in seeing where players are lining up, the pecking order, to help shape the start of camp. Things change, of course, but you have to know where they start to know when things shift.

That in mind, here are some of the things I’m looking for during Day One.

Ben is known. Landry is known. I want to start figuring out who Josh Dobbs is. It’s not like Dobbs can get hit after these two practices so you can learn a little more from the position than others. The big thing for him? Snap to snap consistency. Make a profit on every snap. Good plays lose their luster if they’re immediately followed by ugly ones. Quarterback has to be the most even-keeled guy on the field. Let’s see how Dobbs responds to a mistake (there will be many, only natural).

How many reps will Bart Houston get? I know many don’t care but I always like to see how the snaps are split up. Probably will get 2-3 at the end of a couple of the team scrimmages. Go make a play, my man.

I don’t want to assume anything here. Is James Conner the next man up with Le’Veon Bell sitting out? Or will Knile Davis/Fitzgerald Toussaint get the veteran nod? How does Conner look out of the backfield? That was one of his weaknesses he’s worked one through the pre-draft process.

Also, what’s his level of conditioning? He missed most of spring work with a hamstring injury. Hasn’t had a real football practice for months and months (Combine training doesn’t help). Latrobe is a hot one…let’s see if Conner can get through practice.

Any of the backups stick out? Terrell Watson, Trey Williams, our old friend Brandon Brown-Dukes? Pecking order doesn’t mean a ton, you just throw them out there and see how they do, but it’ll be a starting point for us to talk about.

Oh my, what a mess. No Coates. No Severin. No Bryant. The position will be fine, Coates will return, Bryant will be cleared, but it’s a much more shallow group than we thought going into this thing. That can be a good thing for the rest of the unit. Clears the cobwebs and opens the door for a lot more reps.

Where does Demarcus Ayers line up? The slot looks busy with Eli Rogers and presumably, JuJu Smith-Schuster (do the injuries open him up to play the Z?), so Ayers could be AB’s backup at the X.

Want to see Xavier Grimble finish practice, a big upgrade from where he was at a year ago. Phazahn Odom’s poor blocking could be on display right away. You know Mike Tomlin hovers over those guys on the sleds. Lot of guys are way too high at the start of camp. Quickly realize how important leverage is.

It’s nice knowing the starting five with complete certainty. My guess for the second team offensive line. Left to right.

We’ll see how close I am to getting that right.

Defensive end looks like a really strong group, as good as it’s been top to bottom the past several years. Nose tackle…more muddied. Who is Javon Hargrave’s backup? Daniel McCullers is the best assumption but do Tyson Alualu and/or L.T. Walton get any time there? If they do, look out, Big Dan could be in some serious trouble.

Right outside linebacker is pretty crowded. Anyone playing more on the left side? Anthony Chickillo? Arthur Moats? I want to learn about Farrington Huguenin…completely in the dark on his story. Bud Dupree, now is the time to start dominating. And don’t stop dominating until February, please. Has he found a consistent, go-to move? And has he started to build a counter off it? Both things crucial for him.

We know the starters. Who are the immediate backups? Thinking Tyler Matakevich is the backup at Buck linebacker. What about the Mack, behind Ryan Shazier? L.J. Fort or Steven Johnson?

Whew, so much going on here. Where in the world is Coty Sensabaugh lining up? Sounded like the outside in OTAs but never got a good read on it. My guess on the CB pairings.

There is one odd man out of the group. In my list, it’s Brandon Dixon but you could flip him with Ducre. We’ll see. Someone is going to be the Lew Towler of the group (Gay will get day’s off and that will even the teams, for the record).

These are all projections not based off days off or injury, of course. Let’s get after it.