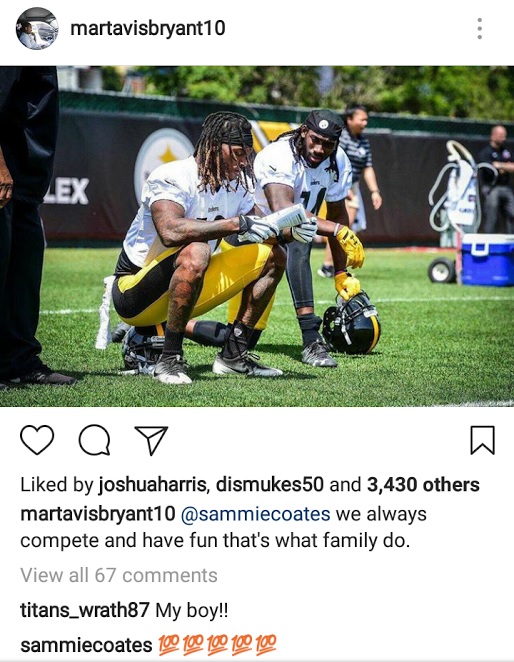 Topic: Who is more likely to be on the Steelers’ roster beyond the 2018 season between Martavis Bryant and Sammie Coates?

This is an interesting future dilemma. The Steelers knew early on that they struck talent gold in the fourth round of the 2014 NFL Draft with wide receiver Martavis Bryant. But they also quickly learned that he is a volatile commodity off the field, and they acknowledged that they were hedging their bets on Bryant when they drafted Sammie Coates in the third round of the 2015 NFL Draft.

Because of Bryant’s year-long suspension for the 2016 season, his contract tolled for a year, so that means that he actually has two years remaining on his contract, which means that both Bryant and Coates will be scheduled to hit unrestricted free agency in 2019.

The odds of them both reaching a second contract seems remote, especially considering that Antonio Brown is already under contract through 2021 and at a hefty $17 million per year average. They generally don’t pay two wide receivers; paying three would be unheard of.

When it comes to Bryant, he has a couple of strikes against him. The off-field stuff is obviously a major factor, and there is virtually no way that they would extend him next year. They would need to see more than just one year of his new life. So he is essentially guaranteed to hit the open market. If all goes according to plan, he would play out of their price range.

As for Coates, there is a realistic scenario in which he doesn’t even make the roster in 2017, let alone in 2019. But he is clean off the field, is potentially a steady contributor on special teams, and is much less volatile. And, likely, much more affordable in two years’ time, with a greater willingness to accept a reduced role.