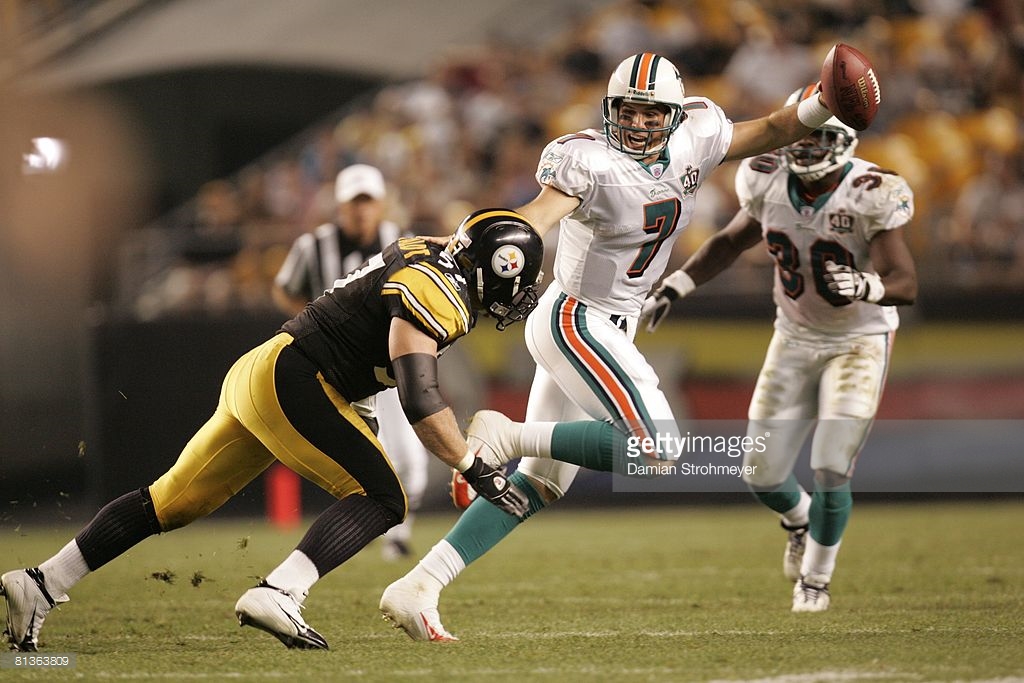 You know I love my special teams’ standouts. Chidi Iwuoma is still my favorite of all-time, basically the first special teamer I ever appreciated. But Iwuoma wasn’t alone on some of the really good Steelers’ third units in the early and mid-2000s. There was Sean Morey, the pint-sized receiver who you might remember for getting chased down by a linebacker. And then there was Kriewaldt, just as vital to the coverage teams as those other two.

He is the last – and only one in the modern era – player to be drafted from his alma mater of the D3 Wisconsin-Stevens Point. 2017 first round pick Ryan Ramczyk began his college career there, to be clear, but transferred to Wisconsin, which got him on the NFL map. Kriewaldt spent his entire career there and then was selected in the sixth round of the 1999 draft by the Detroit Lions. A chance to stay local, he spent his first four NFL seasons there, starting two games while contributing primarily on special teams. His most successful season came in 2001 where he racked up 32 tackles.

Pittsburgh signed him on March 6th, 2003. A signing that, obviously, didn’t generate much in the way of national headlines. It’s tucked way down at the bottom of this LA Times wire, headlined with Jake Plummer linking up with Denver on a seven year deal. Strange times.

Kriewaldt, meanwhile, signed a three year contract for what I assume was minimal money. In his first year, he recorded 19 tackles, forced a fumble, and recovered another.

By 2004, the special teams Big Three was created: Iwuoma signed in ’02, Kriewaldt the next year (both coming over from Detroit), and Morey lured away from Philaldelphia in 2004. All guys who would become special teams captains. In 2004, the Steelers went 15-1. In 2005, they won the Super Bowl? Coincidence? Well…Ben Roethlisberger and that defense might have helped a little bit, too.

It’s hard to parse special teams vs defensive tackles but in 2005, those three combined for 57 total tackles; presumably, most coming on coverage units, though Kriewaldt did see time on defense.

2006 included one of his biggest plays on defense. He intercepted eventual Steeler Bruce Gradkowski late in Pittsburgh’s 20-3 win over Tampa Bay, returning it for 12 yards. That set up a field goal to ice the victory. For the life of me, I couldn’t find video of it. I have failed my blogger cree.

By 2007, the band had been broken up. It was Kriewaldt’s final year, Morey went to Arizona, and Iwuoma’s days were coming to a close, bouncing on and off the roster and throughout the league. It ushered in a new era of special teams standouts, ones we’ve covered before. Patrick Bailey. Anthony Madison. But, to me at least, it just wasn’t the same.

That would be his final year with the team and in the league. In 2007, he spoke to the Trib, and reflected on the upbringing he had.

“My parents were hard workers, and I didn’t have a scholarship to college, so I had to do something. My parents weren’t that well off where they could just hand me money. My parents always laugh at me, and they say I’m pretty tight with my money. That’s just the way I grew up. I never had it and I appreciated it.”

That response was in reference to paying his way through school, taking on odd jobs that once included “castrating pigs.” Oof.

He, like many players we’ve featured, got into coaching, heading up Freedom High School in 2012. Despite the team going 5-5 the year prior, success was immediate and by 2014, he led the team to a 10-2 record. In 2015, they marched all the way to the semifinals after an undefeated regular season but lost when a Hail Mary was stopped short at the one yard line.

After the team took a step back last season, Kriewaldt resigned as head coach, saying he wanted to spend more time with his family.

“I had to look at my life and realized that I had to be there more for my family and kids than the high schoolers,” he told the Post-Crescent. “It was basically a decision based on my family and I told them I’m man enough to admit that during the football season, I’m not the husband and family man that I could be.”

According to the Crescent, Kriewaldt also serves as county sheriff so clearly, his plate was full. Maybe that’s a little Jack Lambert inspired.

He did not rule out a future return to coaching once his kids graduate. And it seems like if he gets back on the sideline, he’ll enjoy the success he did before. And throughout his entire football career.

We’ll leave you with a couple videos of him. One news story on him as Freedom’s coach and a tribute video a local put together, which are always cool to check out.

Clint Kriewaldt, your blast from the past.