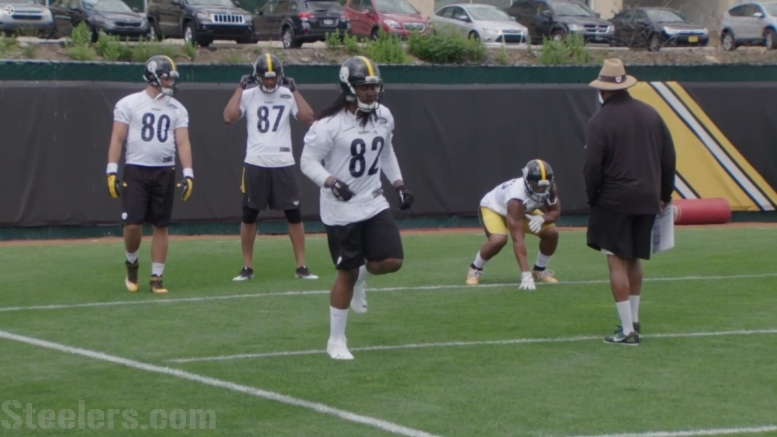 Jesse James: Unless you’re his mother or a delusional Penn State fan, there’s no way you saw the Steelers select Jesse James in the fifth round of the 2015 NFL Draft and think “that guy’s going to be starting in two years’ time”. But that’s what he’s going to be doing. At least for now. Here’s to hoping he can be an average starter.

Xavier Grimble: Positive chatter from players and coaches has followed Xavier Grimble for almost two years now since he was signed by the Steelers to their practice squad at the start of the 2015 season. He got an opportunity to crack the 53-man roster in 2016 and made the most of his opportunities, showing off a bit of blocking ability and a couple of athletic touchdown receptions to boot. He looks ripped this year and now understands what it takes to be a professional. How much of an impact can he make?

David Johnson: David Johnson is now the grizzled old veteran of the Steelers’ tight end room. Originally a seventh-round draft pick by them all the way back in 2009, he had a two-year stint with the Chargers before returning last year and becoming their top blocking and move tight end. There is no reason to think that changes this year.

Scott Orndoff: While the Steelers failed to address the tight end position in the draft, getting Scott Orndoff as an undrafted free agent is at least a bit of a consolation prize. He comes into the league already fairly polished as a blocker and has upside as a receiver. A year of honing on the practice squad might deliver something in the end.

Phazahn Odom: A glorified wide receiver, Odom hardly knew a thing about blocking coming into the league, but he is willing to learn. He’ll never be a blocker, but he just needs to be competent. He must show himself to be a dynamic pass catcher to have a chance of sticking anywhere.

Ladarius Green: The what could have been. Gone one year into a four-year, $20 million contract, Ladarius Green was going to be their new tight end in more ways than one. He delivered when on the field last year, but he was on the field so sparsely that it ultimately hardly mattered. Concussions are a scary thing.

Frankly, I don’t know that there is much to get excited about in training camp. Unless Grimble really blows things up so much that his play demands significant playing time, I think we’re pretty much going to get what we expect here. At best we’ll see a competition between the traditional model (Orndoff) and the receiver model (Odom) for a spot on the practice squad.