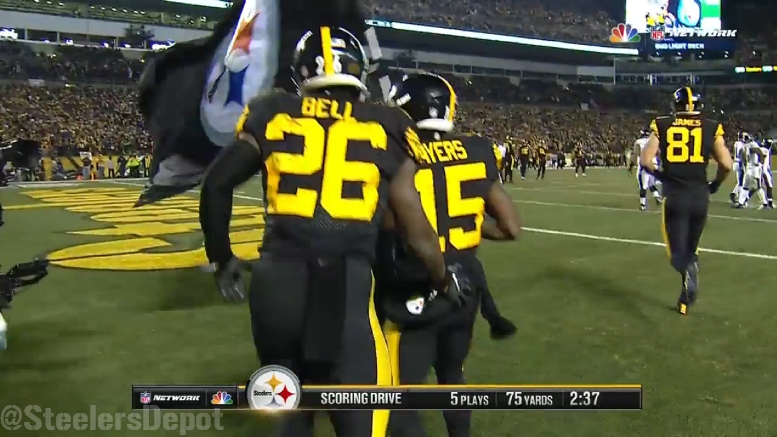 Le’Veon Bell is reportedly not at the first day of the Pittsburgh Steelers’ mandatory minicamp, per NFL Network’s Ian Rapoport.

#Steelers RB Le’Veon Bell has not been spotted at minicamp. But negotiations are ongoing and if things ramp up, that can always change.

It doesn’t come as much of a surprise. Bell has still not signed his franchise tag, not obligating him to be there (he can’t be fined), and missed the entire OTA session for the same reasons. He did, however, visit the facility on at least one occasion and has been training off site.

Bell and the Steelers are working towards a long-term deal. They have until July 15th to reach an extension, a little more than 10 days before the team reports for training camp. Meaning, there shouldn’t be a risk of Bell holding out until camp considering that would be pointless, or he’d have a new deal done.

It’s unclear is Alejandro Villanueva is attending, though initial reports said he is likely to show up, making Bell probably the only Steeler not in attendance.

At the beginning of OTAs, Ben Roethlisberger said he hoped Bell would show. He told reporters he “[wished] he’d be here because he’s one of the pieces of the puzzle.”

It seems unlikely Bell will attend the next two days of minicamp, meaning the first time he’ll be around with his teammates on the football field will be for the first day of training camp. Certainly not the end of the world but having him there would be a great mentor for guys like James Conner.

True, if Bell was in attendance, he wouldn’t practice due to offseason groin surgery, but that seems like an incentive to show. There’s no risk of injury if you’re just standing around and in meetings.

As of Tuesday, Bell is one of three NFL players who were issued the franchise tag this year by their respective teams that have yet to sign new long-term deals. The other two are Washington Redskins quarterback Kirk Cousins and Los Angeles Rams cornerback Trumaine Johnson.

Bell and his agent are likely looking for a new long-term contract that averages over $12 million a year and guarantee him roughly $27-$28 million over the course of the next two years.