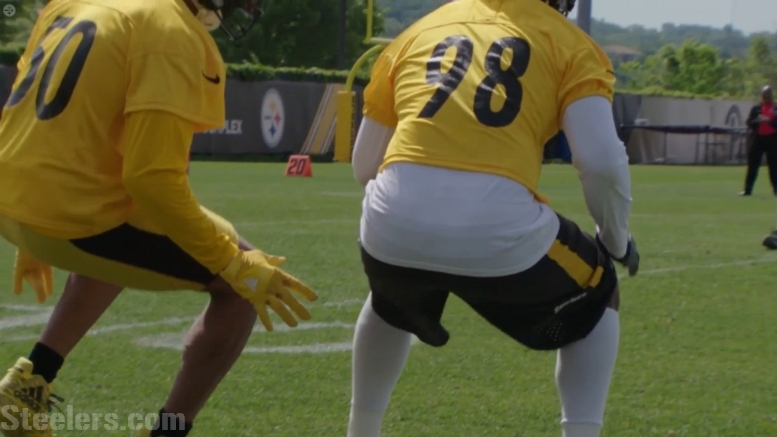 Three years after effectively getting the snub for the job, fifth-year inside linebacker Vince Williams told reporters recently, “I feel like I’m ready”, regarding his assumed ascension into the starting lineup this season for the Pittsburgh Steelers, replacing the stalwart Lawrence Timmons, who signed with the Dolphins in free agency.

The 2016 offseason has certainly been quite a different experience for the former sixth-round pick in comparison to his second spring in 2014. The previous season, he was thrust into a semi-starting role because Larry Foote suffered a season-ending injury in the opening game.

While he was heavily rotated out of the defense throughout the year, utilizing Will Allen as a third safety in the ‘quarter’ package with six defensive backs, Williams was nonetheless the Steelers’ starting Buck linebacker for most of that season, playing alongside Timmons, who at the time was still the Mack.

But Timmons would find himself shifting over to Foote’s spot a year later after the Steelers drafted speedy inside linebacker Ryan Shazier in the middle of the first round. And as is implied in the position switch of a starter, that means that Williams went from starter to backup—and not even the top backup.

Not only did Shazier immediately enter the starting lineup from his very first practice session in OTAs, Pittsburgh also saw the return of 2012 former third-round inside linebacker Sean Spence, who essentially missed his first two seasons in the league after suffering a very bad and career-threatening knee injury that produced nerve damage.

With Spence’s return, he became the top reserve at inside linebacker for the Steelers, and in fact spent much of that season starting due to Shazier’s injuries and inexperience. The former Miami linebacker would continue to run ahead of the Florida State alum until the former left in free agency.

Williams resurfaced last year as the top backup with Spence missing, and got an opportunity to start a couple of games during another Shazier injury, games in which he played quite well. In fact, he has logged over 1000 snaps on defense over his four-year career and has put down some solid tape.

But he also felt that he put down some deserving tape during his rookie season, at least enough to allow him to enter his second season running with the first-team defense, even if that would not be his ultimate role on opening day.

That is why this offseason was so different. The Steelers had their opportunities to make the move, and they chose not to. They made the hard sell for Dont’a Hightower, but ultimately didn’t come all that close to his required salary. They could have taken Reuben Foster in the first round as well. They didn’t.

Had this been three years ago, things almost assuredly would be different, but Williams is grateful for how things turned out. “It shows the organization has a lot of confidence in me”, he said. “It’s the first time I’ve ever felt that way”, he added, a comment loaded with baggage from previous seasons.