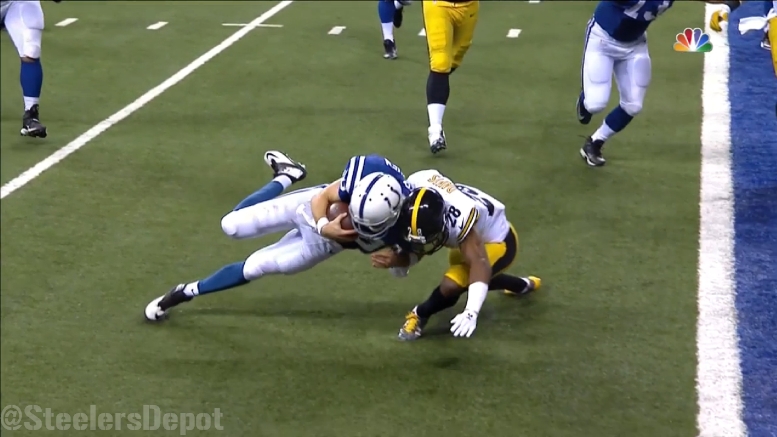 “Last year should be the worst I’ll ever play”. That is exactly what you would want to hear out of anybody, but especially out of one of your rookie starters—your rookie of the year, no less, in a competitive field.

That is what Pittsburgh Steelers second-year starting strong safety Sean Davis told reporters yesterday on the final day of the opening week of OTAs, according to Chris Adamski for the Pittsburgh Tribune-Review.

“I feel like a whole new player”, he said, adding that he is a more confident player as he better understands the game around him, and his assignments specifically, as well as everybody else’s assignments. “I should play a lot faster”, he added.

Davis, the Steelers’ second-round draft pick in the 2016 NFL Draft, had an up-and-down rookie campaign, partially because the coaching staff asked a lot of him to start off, by necessity. When their projected starting nickel cornerback went down with an injury, they asked the rookie safety with cornerback experience to play there.

He served in that role for the first few games before suffering an injury, which coincided with the Steelers gaining enough confidence in fellow rookie, first-round cornerback Artie Burns, to play as the fifth defensive back.

That allowed Davis to revert back to the bench for a while, only to re-emerge following the bye week at the position he was drafted to play. He began by rotating with then-starter Robert Golden, but quickly began logging more snaps, and soon after took over the job on a full-time basis.

Still there was some give and take in terms of his successes. A prominent missed tackle here, an ill-timed penalty there had some commenters lamenting the rookie mistakes. But he also had his highlights, including some quality work at the goal line, among them a run stop and a pass deflection falling out of the right side of the end zone that saved a touchdown.

Overall, he recorded 70 tackles to go along with an interception and a sack and a half, adding another 16 tackles and a sack in three playoff games. And while it may not be a primary feature of his job, Davis showed quite a bit on the pass rush.

That even factors in a couple of plays that he was unable to finish off before he began to adjust and came into the backfield under greater control. According to Pro Football Focus, he was the second-most efficient rookie safety in rushing the passer since 2006, when they began tracking data, recording a pass-rush efficiency rating of 26 percent.

“I want to continue to elevate my game and study and be a leader on defense”, Davis told reporters. “Line up, make calls, play as fast as I can and have the defense play as fast as we can”. He talked about how his class, including Burns and Javon Hargrave, are all on the same page in terms of growing together, playing better, and becoming leaders on the defense.