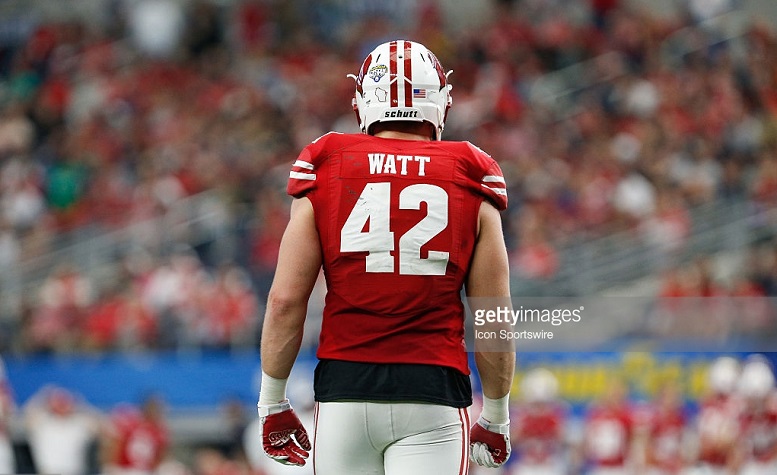 Over the course of their history, the Pittsburgh Steelers have drafted 11 players from the University of Wisconsin. Last night, the team added their twelfth.

With the 30th pick in the 2017 NFL Draft, the Steelers welcomed outside linebacker T.J. Watt as the twelfth man in their Wisconsin fraternity. Though Watt is greeted by a variety of characters such as Hall of Famer Mike Webster and NFL journeyman Kraig Urbik, one individual is jumping at the gun to introduce himself.

Sims shares one similarity with Watt than none of his 11 other fraternity mates can claim. Out of the dozen Wisconsin players drafted by the Steelers’ franchise, only Sims and now Watt hold the honor of being selected in the first round. And while it is a decision that currently brings the potential of glory and promise to Watt’s name, it is one that has haunted Sims and the Steelers for the past 22 years.

Selected ten spots earlier than Watt, Sims was once too a young prospect full of promise and potential. A promise that is still left empty today. Selected to be a mainstay on the defensive line, Sims could barely be a mainstay on an NFL roster. Known as one of the biggest busts in franchise history, the former Wisconsin defensive lineman was cut from the Steelers roster just two years after being drafted in the first round, two years later Sims was out of the league.

In two years, Sims was washed aside from the Steelers memory, taking the Wisconsin spirit with him. The Steelers did not select another player from Wisconsin until 16 years later, when they took Roger Knight in the sixth-round of the 2001 NFL Draft. The relationship was short lived as Knight was cut before his rookie season began. The Steelers were not yet ready to re-connect with their Wisconsin roots.

Eight years after the Knight selection, the Steelers seemed prepared to take a bigger step in re-amending their relationship with the University of Wisconsin by taking Urbik in the third round of the 2009 NFL Draft. The third round seemed to be too much of a commitment for the team as Urbik was waived a year later. It seemed that the curse of Wisconsin would be one to haunt the franchise for all eternity.

But now another eight years after their last attempt, the Steelers are returning to the place of origin in order to reverse the Wisconsin curse. By taking the highly athletic Watt in the first round, the Steelers have made a statement that they are ready to move past the haunting of Sims and commit to Wisconsin glory.