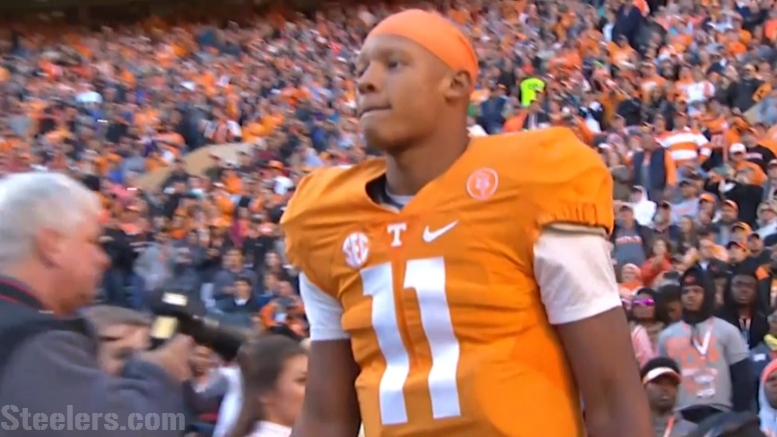 Quarterback coach Randy Fichtner pointed out that Landry Jones was the only quarterback that the team has drafted since he has been here as the quarterbacks coach (although he was on the staff as the wide receivers coach when they drafted Dennis Dixon in 2008), so this was apparently another one of those ‘freshen up the room’ deals.

Evidently, Steelers President Art Rooney II was on Steelers Nation Radio prior to the start of day three of the draft yesterday to talk about a number of issues. I didn’t hear the interview myself, but host Adam Crowley later Tweeted that the owner said “that any QB drafted today is not to be looked at as a replacement for Roethlisberger”.

Art Rooney II said earlier on @SteelersNRadio that any QB drafted today is not to be looked at as a replacement for Roethlisberger.

Personally, that makes me feel even worse about the decision to use a fourth-round pick on quarterback Joshua Dobbs, if they are going into it viewing him as having the upside of beating out backup Landry Jones for the right to back up Ben Roethlisberger for the remainder of his career.

There are a lot of things about Dobbs that are easy to like, and we’ll get to some of those things later on in the week, but my biggest concern is the fact that he simply didn’t display NFL accuracy during his college career, and accuracy is very rarely something that a player improves upon when making the jump from college to the pros.

I have seen the argument that their offense emphasized pushing the ball down the field more, but that only goes so far in explaining his actually completion percentage. It doesn’t do anything about the accuracy issues that we see on intermediate passes on tape.

You have probably read that Dobbs has ‘starter traits’, and he does. He has a lot of intriguing intangibles and I think he is a player who would be able to rally players around him as a leader and command the huddle. He is a smart guy both on and off the field. But that only gets you so far.

This really isn’t about my hot take on the pick necessarily, though. This is about the fact that the Steelers, according to their president anyway, did not take Dobbs yesterday with the idea that he is going to be their franchise quarterback when Roethlisberger retires, in however many years that might be.

Which means they will still be open to taking a quarterback in the first round next year, or, failing that, in the first round the following year, etc., etc. But hey, at least this probably means we don’t have to worry about them using any more mid-round picks on quarterbacks in the immediate future, right?