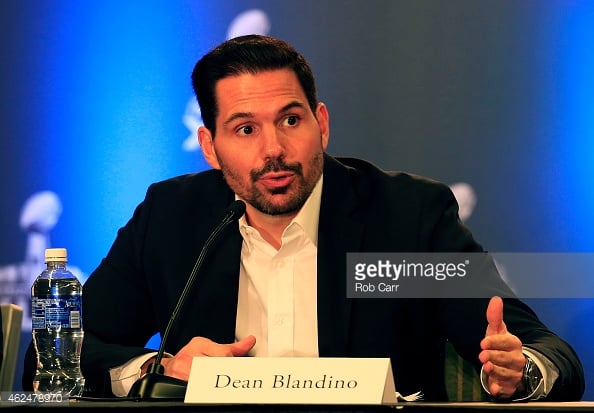 It was just a month ago that the league and owners voted to give Vice President of Officiating Dean Blandino unprecedented and unilateral power over making the final decision as to the results of plays that were chosen to go under review. Now evidently it will be just a month or so more that he remains in his role as he pursues a new career in broadcasting.

Blandino is reportedly actually slated to join the Fox broadcasting team to pair up once again with his former boss, Mike Pereira, who like Blandino after him served a distinguished career as the Vice President of Officiating before vacating the position to pursue a more lucrative opportunity in broadcasting.

There may be plenty to grudge about regarding the on-field officiating, but at least for me personally, I have always respected Pereira and the work that he did while in the league and the work that he continues to do in the broadcasting ranks. I believe that Blandino ably followed in his footsteps as well.

And evidently those around the league agreed with that, which is part of the problem, because according to Ed Werder for ESPN, many were blindsided by this decision, and, needless to say, were not aware of it as a possibility when they voted on the new review rule, with unanimous approval.

From Pro Football Talk, “Werder said one of the reasons the Competition Committee was able to persuade the owners to change the rules is that the owners were confident Blandino would to the job well, and it’s unclear if the rule would have changed at all if the owners had known Blandino was leaving”.

Blandino is not the first employee of the National Football League to retire from his post to join the broadcasting ranks this season. He joins good company in the likes of Ryan Harris, Pat McAfee, Steve Smith, and now Tony Romo, at least of those that I am aware of. There could be even more.

As the game itself becomes increasingly more profitable, I suppose, so too do the opportunities to provide commentary about the game. Even those within the game are seizing upon the opportunity, choosing in some cases to move on with some proverbial meat still on the bone in their careers.

In the meanwhile, the league may face a minor panic in the form of backlash among owners who have just empowered a currently unknown authority to call the shots on replays. Of course, this would be an eventual inevitability whenever Blandino would have left his post, but the horse never even got out of the gate before stumbling on this one.