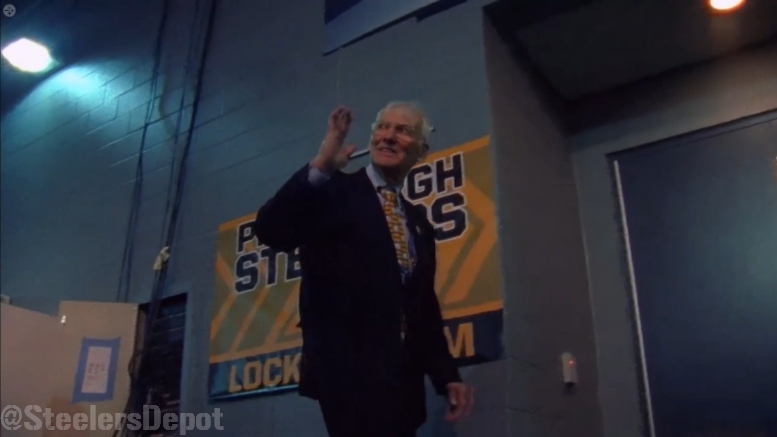 It may be a week and a half since the passing of Pittsburgh Steelers owner Dan Rooney—who was so much more than that, of course—but that doesn’t mean that there is any sort of timetable during which we can continue to talk about him and his impact on the team.

Today’s lesson in Dan Rooney history is literally the most important anecdote in modern Steelers history—the story of how he convinced the team to draft quarterback Ben Roethlisberger rather than offensive lineman Shawn Andrews. That executive decision—or suggestion—no doubt changed the franchise’s fortunes over the past decade-plus.

This is a widely-documented account from which can be cited any number of sources. Just one of them would be an article from Ed Bouchette of the Pittsburgh Post-Gazette on the eve of Super Bowl XLV. “Imagine what might have occurred in the past decade had the Steelers drafted offensive lineman Shawn Andrews in the first round in 2004 instead of Ben Roethlisberger”, he began.

“That was their intention, until Dan Rooney stepped in”. Rooney, in fact, recounted this event in his autobiography published three years prior to the article, in 2007. Bouchette quotes the man himself: “I couldn’t bear the thought of passing on another great quarterback prospect the way we had passed on Dan Marino in 1983, so I steered the conversation around to Roethlisberger”.

“After some talk”, he continued, “we came to a consensus and picked Roethlisberger”. The decision-makers at the time, of course, were a little different. Kevin Colbert had already been there for a handful of seasons, but it was Bill Cowher at head coach, who never really seemed to value the quarterback position the way it is today.

Cowher admitted it years later in an interview, talking about his strategy of playing stout defense and running the football. “I don’t know if you can win a championship like that”, he said. “We did that for many years and fell short without a quarterback”.

Rooney had seen the fruits of that sort of labor time and time again for a couple of decades at that point, which often took the Steelers to the Divisional Round, even the AFC Championship Game, and the Super Bowl once, but never brought a title back home. Not until the year after they bit the bullet and struck in the first round on a quarterback.

In a way, it would almost be fitting if the Steelers were to find Roethlisberger’s successor in this draft, which falls just weeks after Rooney’s passing. The only problem with that sort of tribute is the stark reality that a franchise sort of quarterback may not even be among those available in this class.

The Eagles ended up drafting Andrews five picks later. He went on to play in three Pro Bowls and was even named an All-Pro twice, but he retired after seven seasons due to back pain. Roethlisberger, meanwhile, has won two Super Bowls, playing in three, earning the status of Pro Bowler five times.

Entering the 2017 season, Roethlisberger ranks 10th all-time in passing yardage with 46,814. His 3804 completed passes ranks 11th, and his 301 passing touchdowns falls ninth, as does his quarterback rating. His 29 fourth-quarter comebacks are the 10th-most in NFL history, and his completion percentage of 64.1 is 12th-best.