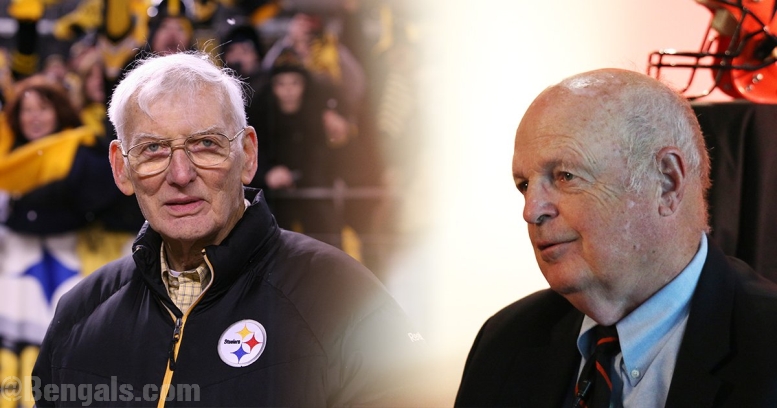 A few days have now passed since Pittsburgh Steelers Chairman Dan Rooney passed away, and in that time I have shared a number of stories of the team’s chief rivals of today’s game expressing their sentiment and paying homage to the man that ran or helped run the team for over half a century.

None had a greater history with the Rooneys than the Brown family, and that includes team president Mike Brown, the son of Paul Brown, after whom is named the Cleveland Browns, and who subsequently founded the Cincinnati Bengals. Mike Brown and Dan Rooney, in fact, share many traits in common.

In both cases, of course, their fathers were domineering figures responsible for not only establishing the team, but also in defining how they would be run in years to come. Mike Brown and Dan Rooney ultimately succeeded their fathers and made their own tweaks in how the team was run before passing along responsibilities to his own son, as Rooney has done.

If you look at the Bengals’ staff directory, in fact, you will see the name ‘Brown’ often enough, in the same way that ‘Rooney’ is prominent in the Steelers’ front office and staff. Both the Bengals and Steelers are family affairs in the way that few teams are today, and they are football families to boot, an even scarcer quality in the NFL in an era in which it takes an outsider billionaire investor to acquire a franchise.

It was perhaps their commonalities more than anything that built a mutual respect between the two descendants of football royalty in spite of their rivalry. “I respected him”, Brown said in a statement. “I liked him. I always thought of him as a friend down deep”.

“We understood the trials and tribulations that go along with participation in the league”—no doubt that knew it better than most, each being octogenarians and lifelong participants in the workings of the National Football League. “We probably had a competitive instinct to beat the other guy on the field. But off the field it’s not that way at all”.

Not that they always saw eye to eye. Brown recalled one time when Rooney, in his words, “really castigated me on the floor of the meeting”. Yet he couldn’t actually even recall what it was about. “It was pretty rough and yet it didn’t affect the way I felt towards him and I like to think it didn’t really affect the way he felt towards me”.

It probably goes without saying that over the course of the years the Rooneys and the Browns have seen fit to run their organizations in different ways. In hesitation due to the respect that Mike Brown showed for Dan Rooney I do point out that the subsequent results may bear comment upon which approach has been more effective. In spite of their differences, however, there has always been a clear, mutual, respect.