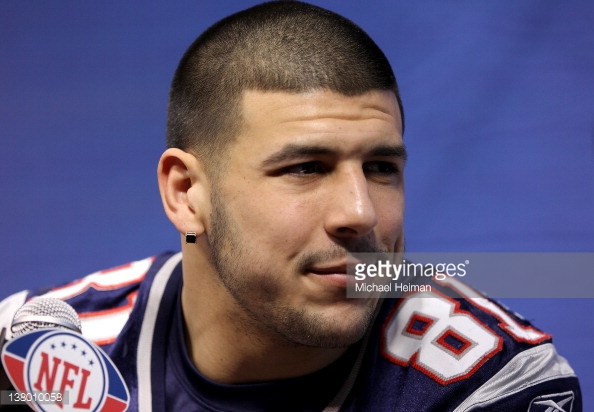 I’m sure you all have been made more than well aware of the fact that former New England Patriots tight end Aaron Hernandez, who was convicted of murder two years ago, committed suicide recently by hanging himself from the window in his cell using a bed sheet, an act that came just days after he was found not guilty of another double murder from an earlier date.

Fortunately for me, this is not an article about Hernandez specifically and the many implications and hot-button issues that narrative touches on. Instead I’m going to focus on the fact that his brain is going to be donated for scientific research into the study of Chronic Traumatic Encephalopathy, better known as CTE—in other words, brain trauma.

Hernandez was a fourth-round draft pick of the Patriots in the 2010 NFL Draft, the same year that they selected Rob Gronkowski two rounds earlier. Yet both of them were exceptionally talented, and it made for quite a bit of trouble for offenses on the field.

From 2010 to 2012, functioning as the Patriots’ second tight end, Hernandez caught 175 passes for 1956 yards and 18 touchdowns. That works out to roughly 60 receptions for 650 yards and six touchdowns per season, which is phenomenal production from your second tight end.

It’s also a large volume of work, seeing 260 targets in the NFL in just three years, at the age of 23, not to mention all the football in his past. That is quite a bit of opportunities to suffer head trauma. From my brief bit of digging, it seems as though he has only been officially diagnosed with a concussion once during his playing career, though that certainly does not mean it was the only one.

You may recall former Bengals wide receiver Chris Henry, who died at the age of 26 in 2009 after falling out of a truck during a domestic incident. In spite of the fact that he had never been diagnosed with a concussion, study showed that his brain was similar to those of retired NFL players late in life who had been diagnosed with many.

Obviously, it should go without saying that we don’t often get the opportunity to study the brains of young football players, and for good reason—they’re alive. At least with our current level of technology, there is only so much we can learn about a person’s brain without actually opening it up.

Hernandez was a monster even if only parts of what have been ascribed to him are true, but perhaps his brain can finally be put to good use. I don’t lament his decision to take his own life, and I am grateful that his family has chosen to donate his brain.

I sometimes wish that the Pouncey brothers would use their brains more often when it comes to Hernandez. Both were seemingly very close friends with Hernandez while they were in college together, and that prompted them to don ‘Free Hernandez’ hats after he was arrested for murder. Both individually paid their respects to their old friend on social media after he committed suicide, which understandably may not look great for public relations to lament the suicide of a convicted murder.