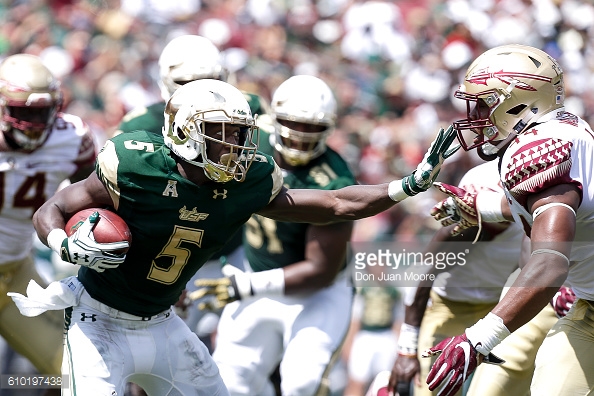 The University of South Florida is one of a few schools holding their annual pro day on Tuesday and according to Jenna Laine of ESPN.com, who covers the Tampa Bay Buccaneers, the Pittsburgh Steelers have at least one person in attendance for it.

In the attached Periscope video, it looks like Steelers running backs coach James Saxon is there running some drills. You be the judge.

Below is a list of the former South Florida players who are scheduled to participate in the school’s Tuesday pro day with the most notable one being running back Marlon Mack.

Mack, who measured in at the 2017 NFL Scouting Combine at 5113, 213-pounds, ran the 40-yard-dash in Indianapolis in 4.50 seconds. The running back registered 1,187 yards and 15 touchdowns on 174 carries last season in addition to catching 28 passes for another 227 yards. He gained a total of 3,609 yards on the ground in his three seasons at South Florida.

Even though the Steelers signed free agent running back Knile Davis on Monday, they’re still expected to draft another running back this year. Mack is currently expected to be a day-two selection.

I will update this post later on in the day with any other information that might surface regarding who it was from the Steelers that attended the pro day.