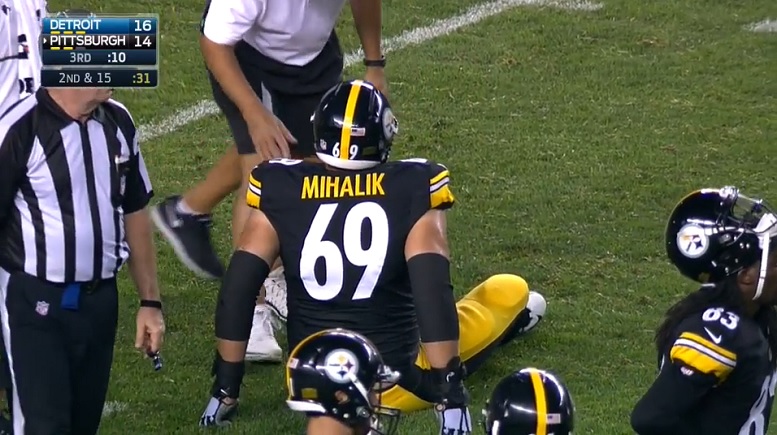 Question: Will Brian Mihalik earn a spot on the Steelers’ 53-man roster?

First of all, I would just like to apologize for my absence yesterday, for those who may have noticed. I was just a little bit more than under the weather, bedridden, in fact, and was unfortunately unable to contribute. I’m still recovering as of writing this, but at least I’m functional again to a degree. Now on to the topic at hand.

This may seem a bit early to be asking the question, but I think the situation with Brian Mihalik is an interesting one. He did after all end up on the 53-man roster when the Steelers needed another body along the offensive line due to Ryan Harris’ injury.

With Harris’ decision to retire, however, one does have to wonder if the Steelers would be considering addressing the backup tackle position in some way. Their current options there are Jerald Hawkins, who spent his rookie season last year on injured reserve, Chris Hubbard, and Mihalik.

Hubbard is as much an interior reserve as he is for the bookends, even though the only starts of his career by necessity came at right tackle last season. I wouldn’t imagine that they would have him as their top backup, and even so, they would probably want two more options.

Hawkins may be in line for that top backup position, but it’s a question mark due to his lack of experience. Mihalik up until about 14 months ago was a defensive end, however.

In fact, he never played offensive line at any level. The closest that he came was a bit of tight end in high school. So he is actually coming in even less experienced than Alejandro Villanueva was.

If I were penciling in a 53-man roster right now, Mihalik would make it by default as the ninth lineman, and perhaps the fourth-string tackle behind Hawkins and Hubbard. But one has to wonder if they’re not contemplating improving this position before the start of the season.