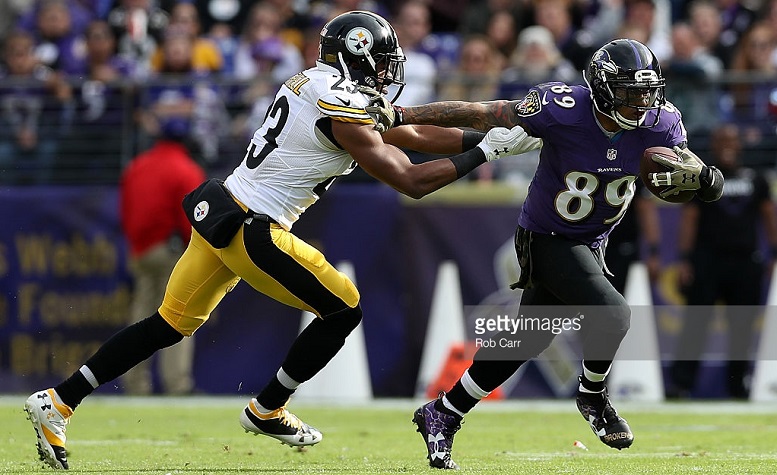 I don’t know how much time you spent watching the NFL Network’s Super Bowl coverage on Sunday, but you may have noticed a new face among the analysts in their employ: former Ravens and Panthers wide receiver Steve Smith, who is evidently very quickly transitioning from player to commentator.

If there is one thing that nobody could fault Smith for, it would be having a lack of opinions or a will to express them. Many seem to find it endearing, though I’ve often found that his attitude rubs me the wrong way.

I’m personally hoping that he checks his ego at the studio door, though his Tweet announcement of his new job in which he told Rich Eisen to “ice up” may not bode well in that respect. Though, to tell you the truth, I really don’t spend a great deal of time watching NFL Network, and certainly not for the analysis. There are bloggers who do a better job than these former athletes in breaking down the game.

“Smith signed a multi-year deal to appear as an analyst on various NFL Network shows, including NFL GameDay First which airs every Sunday at 7:00 AM Eastern during the NFL season”, the accompanying press release reads.

To his credit, his own words in the statement are actually pretty thoughtful. “I was blessed to have a long and productive playing career on the field but now it’s time to turn my attention to the business of covering the game and I couldn’t be more thrilled to be joining the team at NFL Network”, he said.

“As the only network with a 100% focus on the sport I love”, Smith went on, “I was drawn to NFL Network and look forward to joining a team made up of many legends of the game”. They do have a number of Hall of Famers on their staff, and Smith will no doubt be joining them one day, likely within the next decade if I were to guess.

Smith played for 16 seasons, with the last few coming with the Ravens, and he at times had his way with the Steelers. Pittsburgh Steelers safety Mike Mitchell was on the receiving end of a couple of his better plays, which resulted in the veteran wide receiver referring to him as a…cabinet. It made more sense in the metaphor he was going for, trust me.

Smith finished out his career with 1031 receptions for 14731 yards and 81 receiving touchdowns, averaging 14.3 yards per reception over the course of his career. His reception total ranks 12th all-time while his receiving yardage figure landed him in the seventh spot.

It’s somewhat interesting that only two of the players ahead of him are in the Hall of Fame, but the other four are bound to be. They include Terrell Owens and Randy Moss, with the latter reaching his first year of eligibility in 2018. Tony Gonzalez, also on that list, is eligible in 2019. Isaac Bruce is still waiting, but he will get in someday.