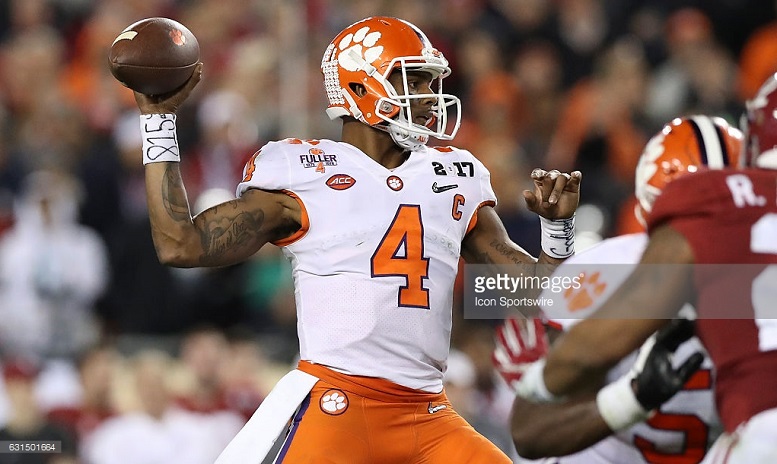 There is still quite a bit that we don’t know about the Cleveland Browns and their plans heading into the 2017 offseason. We do know that they are looking for a quarterback, but we have heard a variety of reports already that attempt to indicate in what sort of direction they are heading.

The draft is an obvious option given that they hold the first-overall pick. They have the opportunity to select literally any eligible player in the nation and bring them into the organization, including whatever quarterback they believe to be the best.

The majority opinion seems to be that Clemson quarterback Deshaun Watson is that top quarterback for the 2017 NFL Draft. Considering that, it is no surprise that the Browns have already been linked to him on a number of occasions this offseason. Cleveland’s coaching staff coached the South unit during the Senior Bowl, and reportedly asked Watson to play, but he chose not to.

That evidently led to reports that the Heisman Trophy nominee was attempting to avoid the Browns, perhaps in an attempt to dissuade them from drafting him so that he could have the opportunity to land in another spot in the NFL. It would not be the first time, after all, that a player has influenced his ultimate landing spot during his rookie season.

Watson predictably denied the rumors, calling it “wrong, false information”. He said that he talked to Browns head coach Hue Jackson, adding, “we had a great conversation right after the national championship game and I told him, ‘hey, this is what I’m thinking about’, and he understood everything. I talked with my family, my agent, my trainer, all the coaches at Clemson, and it was just best for me to go ahead and get started on the draft process”.

He was referring, of course, to his decision not to participate in the Senior Bowl, a situation that drew some criticism. It also led many to draw comparisons to some other recent quarterbacks in a situation similar to his who decided not the attend and subsequently saw their draft stock fall.

Watson said that he did a lot of moving around after the college season ended as a partial way to explain his decision. He moved from Georgia to California in order to prepare for the Combine and saw going back and forth for the Senior Bowl as an unnecessary obstacle.

He did say that he plans to do everything at the Combine. That has not been the case for others in his situation, though the subsequent effect on their ultimate landing place in the draft has varied.

Of course, if he really were attempting to avoid the Browns, it would be hard to fault him too much. Cleveland hasn’t exactly been a hotspot destination for players in the league since—well, let’s just say it’s been a while.