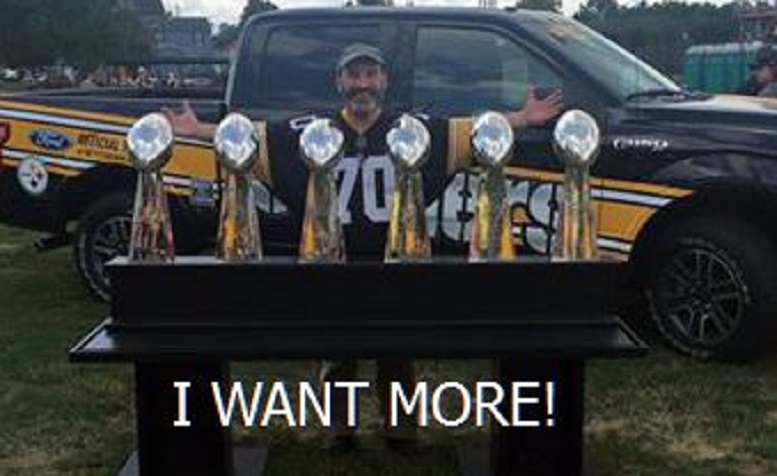 Last week, I offered some treatments for Pittsburgh Steelers Season withdrawal symptoms. Here is a little update on how those distractions are doing:

Sidney Crosby of the Pittsburgh Penguins scored his career 1000th point this past week. The third skater after Mario Lemieux and Jaromir Jagr to score at least 1000 for the Penguins. The team went 2-2 during the past week and are now in 2nd place in the Metropolitan Division despite losing their last two including an overtime loss to the Columbus Blue Jackets.

Andrew McCutchen wrote a letter to Pittsburgh Pirates fans stating in part, “…As far as I’m concerned, until that phone rings and I’m told otherwise, I’m a Pittsburgh Pirate for life.” Pathetically, he admitted to googling himself to check out the trade rumors. The Buccos just finished their first week of spring training so the highlights so far are Photo Day and “live” batting practice. I wonder what “dead batting practice is like.

The University of Pittsburgh men’s basketball chances for an NCAA bid took a big blow when they lost to Virginia Tech 63-66. The Panthers then rebounded with a big 80-66 beating of # 17 Florida State Seminoles. Pitt’s coach insists they are still playing for an NCAA tourney bid but at 15-12 that seems very unlikely.

Perhaps the biggest drama was # 2 Penn State wrestling beating # 1 Oklahoma State. In the very first match, Penn State’s freshman sensation Nick Suriano had the lead but suffered an ankle injury that forced him to default the match. Oklahoma State took the next two matches to gain a 0-13 lead but then the Nittany Lions rolled off seven straight wins for the 27-13 upset. Penn State coach Cael Sanderson caused a storm of discontent by opining that having a national dual tournament in addition to the NCAA individual tournament may be too much and leading to injuries. Suriano’s status for the NCAA Division 1 tournament scheduled for mid-March is unknown.

Now perhaps the strongest tonic for jittery fans suffering through the doldrums of an off season before the draft – Steelers Depot. For those of you who took your daily dose; there were some 87 articles rattling off Dave Bryan’s keyboard along with Matthew Marczi, Alex Kozora, Daniel Valente & Sean McKaveney (hope I didn’t miss any contributors) from writing my last article to beginning this one. That’s more than 12 articles a day! How many did you read? Be honest.

You got to hear Dave & Dave on another edition of The Terrible Podcast analyzing Kevin Colbert’s comments; toss queries into Alex’s mailbag and answer the Friday Night 5 Questions. Some of the articles focused on what current Steelers are doing now: DeAngelo William’s appearance on The Talking Dead; Antonio Brown interviewing his alter ego Ronald Ocean; and Ben Roethlisberger’s foundation handing out grants to various law enforcement agencies. We learned that Joey Porter is not the only NFLer to get into trouble in Pittsburgh’s Southside as Darrelle Revis came back home for a visit. Yoi, don’t you guys remember the trouble Jack Lambert had trying to get a drink in a public establishment? He had to put a couple hard hats & himself into the hospital just to quench his thirst.

We learned that the Steelers were ranked 20th in one Special Teams analysis and there was a separate positional review of the Steeler’s specialists. It seems the kicker, punter & long snapper are solid but the surrounding cast need to step it up – or is it the coach? Matthew Marczi offered six exit meetings based on “…how we would conduct those meetings if they were let up to us.” James Harrison, Bud Dupree, Lawrence Timmons, Ryan Shazier, Ross Cockrell, Artie Burns here is feedback on your 2016 performance and expectations for the 2017 season.

Looking to the future, Steelers Depot published ten draft profiles including Kareem Hunt, Evan Engram, Budda Baker, Derek Rivers, Ryan Anderson, Josh Dobbs, Jordan Leggett, Samaje Perine, Corn Elder & Bucky Hodges. What are the chances any of these guys are picked by the Steelers? I don’t have a clue but have some insight if they are or of they go to one of the division rivals. We also got a peak at Mike Mayock’s early position rankings and Mel Kiper’s mock draft predicting Haason Reddick as the Steelers # 1 pick. Alex Kozora reported on Reddick in depth a few weeks ago. Maybe Kiper is trolling Alex. Another mock draft has the Steelers picking defensive back Desmond King but then another expert says the Steelers won’t draft a cornerback in the first 3 rounds. Even in the free agent market; there is a piece supporting the pick-up of Minnesota Vikings cornerback Captain Munnerlyn and a Pro Football Focus article saying Washington Redskins wide receiver Pierre Garcon needs to be in the Black & Gold.  Bottom-line, regardless of your position you’ll find someone sports pundit to support your cause.

So, keep up with your daily dose for free agent analysis, draft profiles, resignings and current Steelers in the news. I want more!