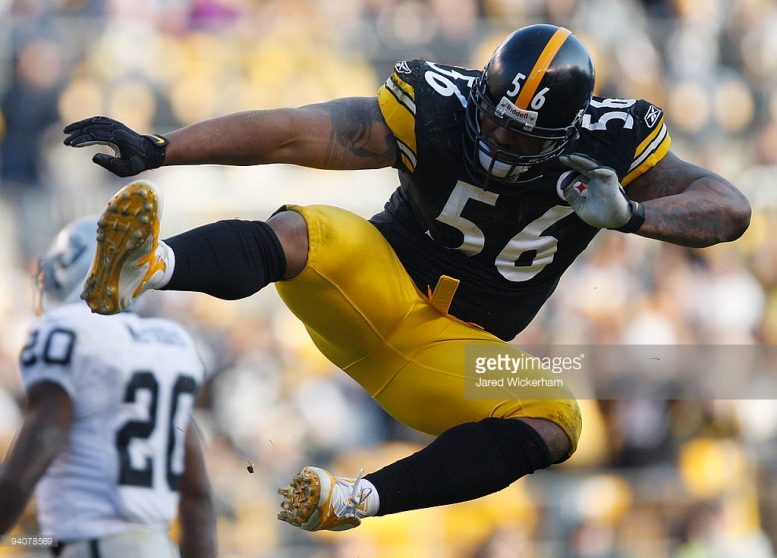 ESPN’s Michael Roberts caught up with former Pittsburgh Steelers linebacker LaMarr Woodley in this article for the Worldwide Leader. While Woodley said he hadn’t issued his retirement papers yet, he made it clear he’s not looking to return to the NFL.

“Pretty much, without the papers,” Woodley said when asked if he was retiring.

Woodley was out of the NFL for the entire 2016 season. His last playtime came in 2015, starting seven games but recording only 10 tackles and a lone sack. Seven of his nine seasons came with the Steelers, who drafted him in the 2nd round of the 2007 draft out of Michigan. He had huge peaks in his career, three straight seasons of double-digit sack totals from 2008 to 2010. The duo of himself and James Harrison made for some of the best pass rushers in the league.

But there were a fair share of lows, too. After receiving a monster contract in 2011, he never lived up to those expectations, never hitting that double-digit sack total again. Injuries piled up, his weight and training became an issue, and by the end of the 2013 season, he was gone. A year with Oakland, that year with Arizona, and his career was over.

In all, he recorded 58 career sacks, 57 of those with the Steelers. He forced another nine fumbles and picked off five passes.

Today, per the ESPN article, Woodley says he’s involved in community and charity work while going to school for his master’s degree. From friends who had class with him, he enrolled at California University in Pennsylvania.

He summed up his career to Roberts.

Here’s some fun highlights to ride off into the sunset with Woodley.