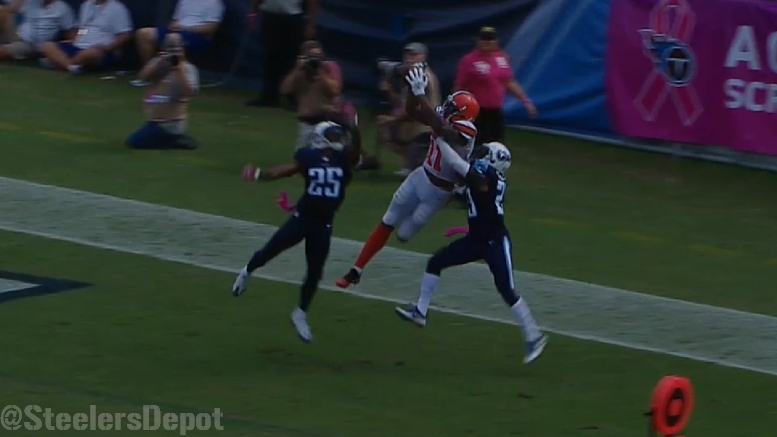 The Cleveland Browns certainly find themselves in an interesting position as an organization. While not totally a tabula rasa entering the second offseason with their latest regime, there is still plenty of room for change following a one-win season. There has in fact already been a significant amount of change both on the roster and the coaching staff.

I suppose this is a way of saying that there hasn’t been a great deal of constancy with the Browns over the course of the past year—or really the best X number of years—so it’s certainly a bit of an oddity that one of the most consistent players for them last year was quarterback-turned-wide-receiver (every-so begrudgingly) Terrelle Pryor.

And just as Pryor exploded onto the scene he finds himself on the cusp of hitting unrestricted free agency. Perhaps ‘exploded’ is a bit of a strong word to describe his impact, but it is the Browns we’re talking about, and so the term is used in a relative sense. After all, they had six different players, including himself, throw at least a couple of passes last year.

The former Ohio State quarterback turned in the first 16-game season of his career, recording 77 receptions for 1007 yards and four touchdowns. He also rushed for another touchdown, and completed five of nine passes for 41 yards. Those are some pretty impressive numbers when you take into consideration not only where he came from, but also the circumstances in which he played.

That is probably why Pryor’s agent, Drew Rosenhaus, is reportedly slated to meet with Cleveland’s front office this week according to Jason La Canfora in order to discuss details on a new contract for his client during the last few weeks before the official start of the new league year—and the beginning of open season on free agency.

La Canfora actually Tweeted the news saying that the Browns were “re-doubling efforts” on what he described was their “top offseason priority” in getting Pryor under contract. It is worth noting that they have already completed a four-year deal with linebacker Jamie Collins.

In spite of the fact that he wasted much of his career hanging on to a false hope of making it in the NFL at the quarterback position, the fact of the matter is that he is a legitimately talented football player who is just beginning to tap into his skills as a wide receiver.

Pryor is a 6’4”, 220-plus-pound athlete who is still just 27 years of age, and he showed that he can produce an 1000-yard receiving season with a woefully sub-par all-around supporting cast, let alone below-average play from the quarterback position—and a revolving door to boot.

The truth of the matter is that this is not the most robust wide receiver free agency market that we have seen in recent years, which will, as was the case last year, inflate the value of those who are available. That makes it all the more worth their while to get this deal done sooner rather than later.