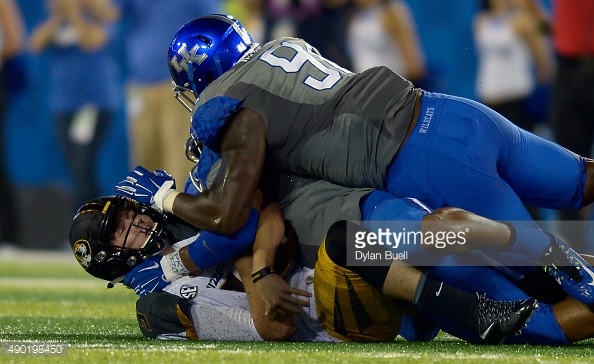 Next up is outside linebacker Farrington Huguenin.

That isn’t a copy and paste error and no, I’m not trying to summon him Beetlejuice style. I’m just trying to condition myself to instinctively know how to spell Huguenin for training camp for whenever I have to tweet his name out. It might be the toughest thing I have to d.

God, I hope he isn’t the first player down St. Vincent stairs each day.

Aside from sounding like the lead in Downton Abbey, who is Hugenin? He served as Bud Dupree’s teammate for three years, 2012 to 2014. He never came close to that Dupree-level of success, a footnote on the stat sheet, ending his career with just 5 tackles for a loss and 1.5 sack. Most of that came in his senior season.

Like many high school athletes, Huguenin (pronounced, “HUE-guh-nin”) dabbled in everything. He was a star linebacker but was a standout wrestler and regional champion in shot put. He bulked up to play defensive end for Kentucky and may have tried to drop weight when it came time for the NFL. Listed at 282 in his bio, he arrived at his Pro Day at 271 pounds. His 40 time was below average, a 4.87, but his more important explosion numbers carried some intrigue – 34 inches in the vert, 10’2″ in the broad.

That wasn’t enough to overcome the minimal production and he went undrafted. Miami jumped on him as a UDFA and carried him through camp until he was waived/injured with an ankle injury. Phins Insider gives a detailed description of what happened.

“Huguenin was injured on August 2 when running back Damien Williams blocked him in goal-line situation pass blocking. The rookie was carted off the field a few minutes later and a brief scuffle broke out. Ndamukong Suh pulled Williams to the side after everything calmed down and appeared to address the play. Huguenin has not been able to practice since the play with what has been described as an ankle injury.”

It doesn’t appear he signed anywhere else, nursing his ankle injury, and spending the regular season as a free agent. The Steelers signed him to a future’s deal on January 27th.

Determining a position for him is a little tricky. Presumably, it’ll be at outside linebacker but like Anthony Chickillo or Dupree, he should be asked to slim down to move better in space and help his conditioning. The Steelers will certainly bring in some new faces at outside linebacker. Out with the hold, in with the new. Huguenin will have to immediately demonstrate he can make the transition and scratch and claw his way for reps. It certainly won’t be easy.

Yeah, I’m probably going to screw that one up.