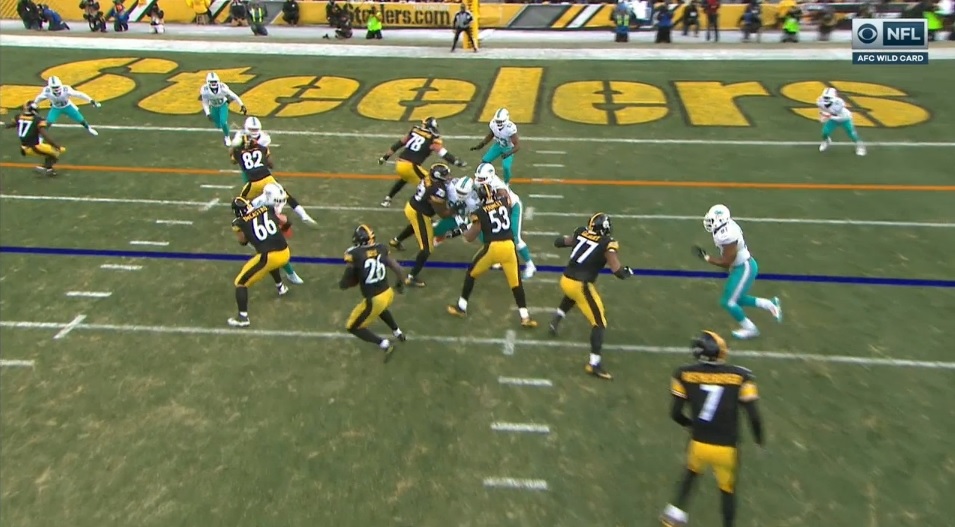 The Pittsburgh Steelers today played in their 57th postseason game of the Super Bowl era. They came away with their 35th win, which is, at least for this week, the most in NFL history. The Steelers and the Dallas Cowboys entered this postseason tied for the most postseason wins with 34, but with a bye week, the Steelers got the first crack at 35th, and got it.

The game marked the 12th postseason victory of quarterback Ben Roethlisberger’s career, and the sixth season in which the Steelers won at least one playoff game. It is the sixth time that they have advanced to at least the Divisional Round.

The Steelers with today’s win are now 2-2 in the postseason against the Miami Dolphins, although they had not faced each other since 1984, which was a loss in the AFC Conference Championship against Dan Marino.

In order to ensure that they keep pace ahead of the Cowboys, Pittsburgh will have to come out of Kansas City on Sunday with a win over the Chiefs. The two teams have only shared one game in the postseason previously, during which the Steelers lost, 27-24, in overtime in the Wildcard Round of the 1993 season.

The Steelers certainly have plenty to boast about regarding their playoff successes, as they hold virtually very record. But after today’s win, they have only now finally regained a positive record in the Wildcard Round. They are now 6-5 in the opening round, but were 4-5 prior to the 2015 season.

The Steelers’ 30 points scored today is the most that they have put up in a playoff game since they beat the Ravens in the Divisional Round 31-24 in 2010. The 12 points they allowed against the Dolphins is the fewest they have allowed since the Super Bowl victory over the Seahawks in the 2005 season.