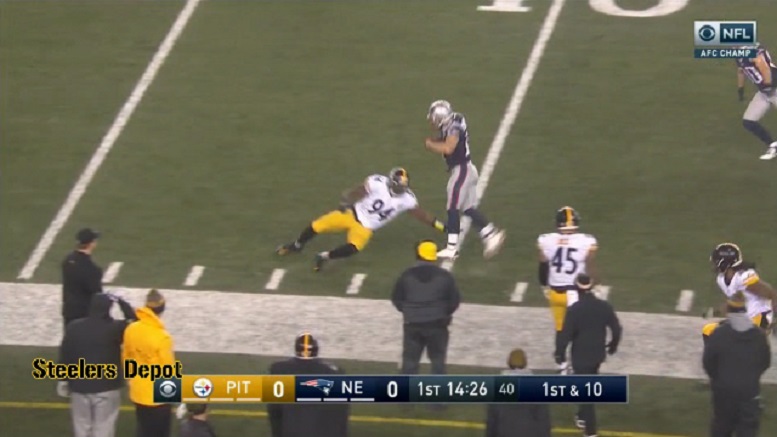 I know this could be a painful article to get through, but at least(?) it’s the last missed tackles report of the season.

On Sunday evening against the New England Patriots in Foxborough, the young, ever-improving Pittsburgh Steelers defense turned in a clunker against Tom Brady and company, allowing the Patriots to rack up a ton of yardage through the air.

Coming into the game the Patriots averaged the most yards after the catch in the NFL, and they continued to do that against the Steelers, forcing 10 missed tackles in a 36-17 win to clinch a ninth trip to the Super Bowl.

Based off of my first two times through the game film, I felt that Lawrence Timmons had a really strong game against the Patriots, but going through the game a third time to track missed tackles, he really struggled in space to make stops on the speedy New England receivers, namely Julian Edelman, whom he missed twice in the open field.

On the second play of the game, Edelman gets a free release off the line and gets the ball quickly in space, going one-on-one with Artie Burns in the open field.

By shedding Burns’ attempt, Edelman has a free run down the sideline until Timmons comes closing in.

Instead of using the boundary to his advantage, Timmons is out of control and fails to break down, allowing Edelman to sidestep is poor tackle attempt to get back into the middle of the field to pick up another 18 yards on the play.

Later on in the game Timmons has another big missed tackle on Edelman.

Timmons has a one-on-one shot with Edelman near the right hash marks, yet he’s unable to fully wrap up the slippery Edelman, who goes on to pick up another six yards on the play, matching his average this season.

Although Timmons finished with a game-high 14 tackles, he — like the rest of the team on both sides of the ball — left some plays on the field that added up to defeat.

Outside of Timmons, Sean Davis had a tough time wrapping up Edelman despite playing some of his best football down the stretch this season. The rookie safety picked a bad time to have a down game at this point in the season.

Matched up one-on-one in the slot with Edelman, Davis is well off the ball and allows the simple out route to the Pats receiver near the left boundary.

Much like Timmons did earlier, Davis fails to use the boundary to his advantage, hesitates and allows Edelman to throw a stiff arm to his chest, allowing the New England star to race down the sideline for 18 yards, setting up Edelman’s touchdown three plays later.

Overall, it wasn’t a horrendous day from a tackling perspective like we had seen throughout the season, but it was Pittsburgh’s worst performance from a tackling standpoint in three postseason games.