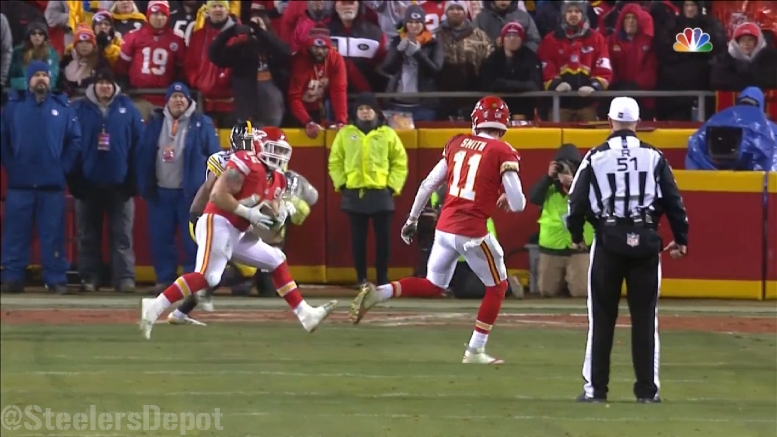 The Kansas City Chiefs may have gone just two-for-nine on third down during last night’s loss to the Pittsburgh Steelers, but that 22-percent conversion rate doesn’t tell the full story, and not just because they also managed to convert on both of their attempts on fourth down, which essentially negates two of the failed third-down conversion attempts.

The reason that it’s bothersome is because the Steelers allowed the Chiefs to have all of their success on third and fourth down in the second half, which directly led to their two second-half scores, starting with a field goal and ending with a touchdown and what was very nearly a game-tying successful two-point conversion.

The initial third-down defense for the Steelers was actually excellent—and it should be noted that the Chiefs never had to face a third down on their opening drive, on which they scored a touchdown. The first third-down situation they were put in was third and 16 on their second drive from their own 19, on which they ran a screen for eight yards.

Over the course of Kansas City’s final two drives of the first half, they ran just eight plays, with one first down, failing to convert on third and seven on a three-and-out. Their final drive of the half ended with a fumble still on their side of the field with just seconds remaining.

Overall, the Chiefs were 0-2 on third down in the first half, having had two drives end with turnovers before they had to face the key situational down. They had seven situations in which they faced a third down in the second half, however, and they converted four of them when you consider that they were able to make up for two failed third-down conversion attempts on fourth down.

They were able to get away with the first conversion allowed after the Chiefs started the half with a three-and-out with an incompletion on third and 11. On their next drive, a direct snap to the running back on third and three from the Chiefs’ 45 went for eight yards, and they got to the Steelers’ 39 before a delay of game on third and two and then a sack pushed them back to midfield and forced them to punt.

But on their final drive of the third quarter—after an unnecessary roughness penalty turned a third and five into third and 20—Alex Smith hit Jeremy Maclin on a breaking route to the sideline for exactly 20 yards. While the drive stalled three plays later, the failure to make the stop on third and 20 put the Chiefs in field-goal range and made it a 15-10 game.

On the Chiefs’ final drive, they went 1-for-3 on third down, but 2-for-2 on fourth down, with Smith connecting with Chris Conley for 12 on fourth and eight from the Steelers’ 38. Later, on third and nine, Sean Davis hit Conley in the helmet for a personal foul that put them on the 12-yard line. After throwing incomplete on third and two from the four, Smith connected with his fullback on fourth down, and the Chiefs scored on the next play.

You know how the rest of the game went. The Steelers’ situational defense failed them late, and it hasn’t been the first time this season. They will need to be sharper and take advantage of every opportunity to get off the field the next time around.