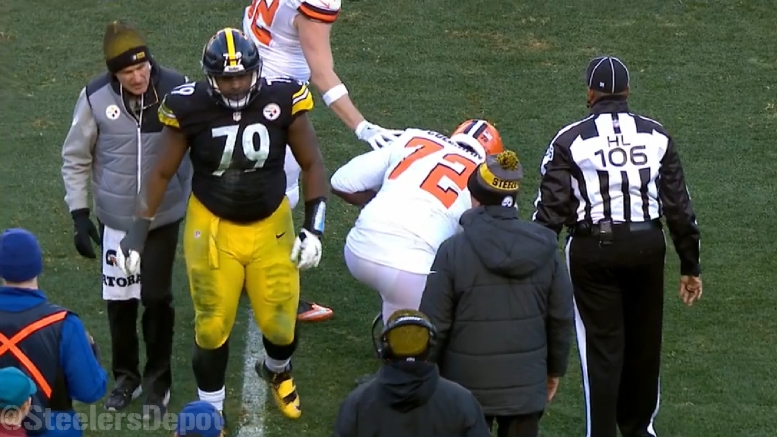 If there is one thing that the Pittsburgh Steelers cannot afford—at least when it comes to the defensive side of the ball, because we know all too well how indispensable their triplets on offense are—it would be yet another injury to the defensive line. Which means that they dodged a major bullet late in the game against the Browns when Javon Hargrave came off the field to be checked for a concussion.

The play happened about midway through the fourth quarter. With Hargrave checked in as the left defensive tackle in the nickel, the play rolled to the defensive left side on a run to the right for quarterback Robert Griffin III. As the Browns line ran a pin-pull, Hargrave took a shot to the head/neck area and from there stumbled in the general direction of the play.

As he stumbled forward and to the ground, it appears as though he may have taken one or two hits to the head, from the lineman who was pushed over his head, and by Griffin running over him—for which he was officially credited with the tackle.

The rookie defensive tackle was slow to get up at the end of the play, and he certainly looked to have come off the field groggy. If you go back and watch the aftermath of the play, as they focus on the injured lineman for the Browns, you can see Hargrave’s feet at the top of the screen, taking shaky, choppy, unsure footsteps at first.

He was then led off the field by medical personnel and presumably immediately underwent the concussion protocol procedures, as he was clearly showing potential symptoms that warranted further investigation.

But after one more play and a missed field goal the Steelers offense led a five-play touchdown drive, and Hargrave was back on the field for the following defensive snap. For two snaps, anyway, as he checked out after that, and I believe that that is all he played for the rest of the game.

He reportedly played coy with the media following taking full practice reps yesterday in the team’s first full practice of the week about whether he was benched for the remainder of that game or if he was removed due to ‘injury’, which would indicate that he may have had a concussion.

Hargrave, of course, already suffered a concussion earlier this season, and sat out a game because of it, so simply for his own health, I sincerely hope that that was not the case. But from a personnel standpoint, the Steelers really can’t afford to lose him, or any more linemen.

While Stephon Tuitt may be back, even at less than 100 percent, Ricardo Mathews is still banged up, and had to exit Sunday’s game with the ankle injury that he recently suffered. You can only count on getting so much out of the rest of that group, so there lies a pretty big burden on the rookie’s shoulders to stay right—and not to wobble.