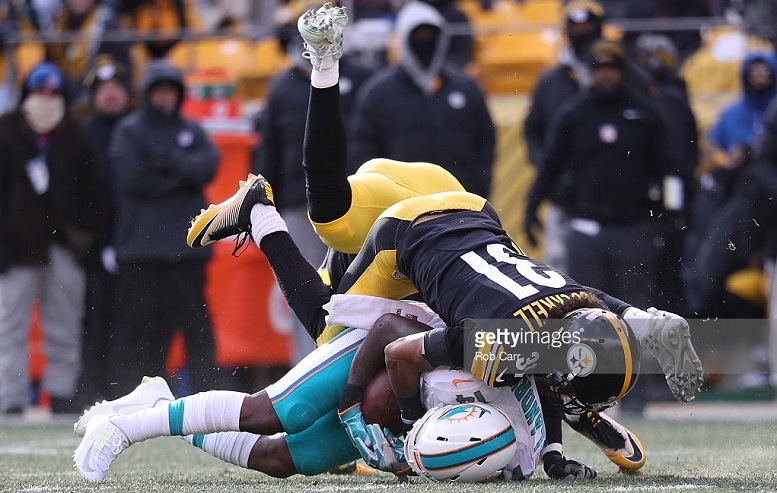 The Pittsburgh Steelers beat the Miami Dolphins in a convincing fashion Sunday at Heinz Field and it included their defense holding the opposing offense to just 52 rushing yards, which is a far cry from the 222 yards they allowed on the ground back in the Week 6 meeting the two teams. That aside, the Steelers defense still allowed Dolphins quarterback Matt Moore to complete all but seven of his 36 passing attempts for 289 yards and a touchdown.

On the surface, Moore’s passing completion percentage and yards per attempt was solid but when you dig deeper into the actual numbers, you’ll see that the Steelers defense was on point when it came to their tackle-the-catch philosophy.

According to our own early charting numbers from Sunday’s game, the Steelers defense allowed just 77 yards after the catch to the Dolphins offense on their 29 total completions. That works out to an average of just 2.66 yards after catch, which is quite impressive.

It’s probably also worth pointing out that 15 of Moore’s 29 total completions against the Steelers defense came in the fourth quarter along with 30 yards after the catch. The Steelers were of course leading the game 30-6 after the first three quarters so it’s easy to speculate that their defense was doing their best to not give up anything over their heads at that point of the contest.

If you were to eliminate what the Dolphins did passing-wise in the fourth quarter on Sunday, you’re left with Moore completing 14 of 18 of his pass attempts for 177 during the first three quarters of the game with 47 of those yards coming after the catch. That averages out to 3.36 yards after the catch, which still isn’t very bad at all.

Much like New York Giants wide receiver Odell Beckham Jr. in the Steelers Week 13 regular-season game at Heinz Field, you knew Dolphins wide receiver Jarvis Landry was likely to get a high number receptions on Sunday and he did just that as he registered 11 total catches for 102 yards. What you should have probably been worried about the most about Landry prior to Sunday’s game was the fact that he entered the contest averaging a gaudy 6.7 yards after the catch during the regular season.

In short, the Steelers defense accomplished their weekly goal of stopping the run, tackling the catch and not giving up big plays. Sure, Moore completed three of his four deep passes for explosive plays against the Steelers on Sunday but when you consider the fact that the Pittsburgh defense gave up six plays of 20 yards or more to the Dolphins when the two teams met back in Week 6, that’s a remarkable improvement.