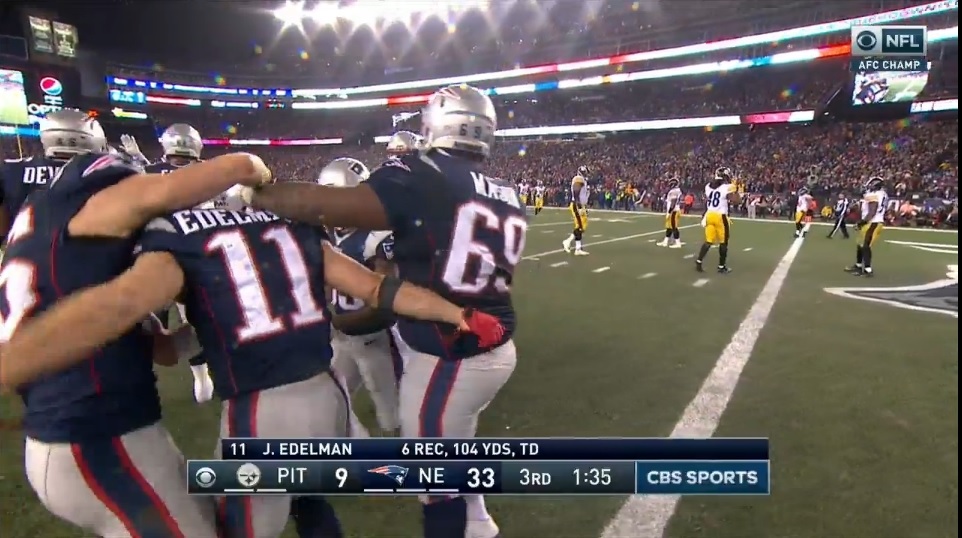 It’s getting weird. And a little depressing. Fair warning, most of this isn’t very pretty.

– The Pittsburgh Steelers’ point differential of a 19 point loss is the worst defeat in team playoff history since a 24-3 loss to the Buffalo Bills in 1993. Only three others have ever been a 20+ margin. One other was a 19 point loss.

– The Patriots’ had the worst playoff rushing performance against the Steelers and still win…ever. 27 carries, 53 yards (2.1 YPC). That just edges out the 25 carry, 53 yard line from the Baltimore Ravens in 2015.

– And Chris Hogan’s 180 receiving yards are the third most ever against Pittsburgh. Only behind Demaryius Thomas’ 204 and Cliff Branch’s 186 in 1973.

– Finally, their 36 points is the most given up by Pittsburgh in the playoffs since…the Patriots had 41 in 2004, Ben Roethlisberger’s rookie year.

– Steelers were far from the lottery yesterday but hit triple sevens. Antonio Brown, DeAngelo Williams, and Eli Rogers all had seven receptions.

– The Patriots continue to dominate in the red zone. In the Brady/Tomlin era, the Pats are now 22/31 in converting red zone chances into touchdowns. That’s 71%. Insane.

– Pittsburgh’s 54 yards rushing is their fewest in a playoff game since 2009, a win over the Ravens.

– Final one for you, a testament to how well the offensive line has played. In the Tomlin era, there have been just three games, playoffs or regular season, where the Steelers threw the ball at least 45 times and weren’t sacked. Two of those came against New England. Both in 2016. Both, of course, losses.

That was supposed to cleanse your pallet. I don’t think it worked.