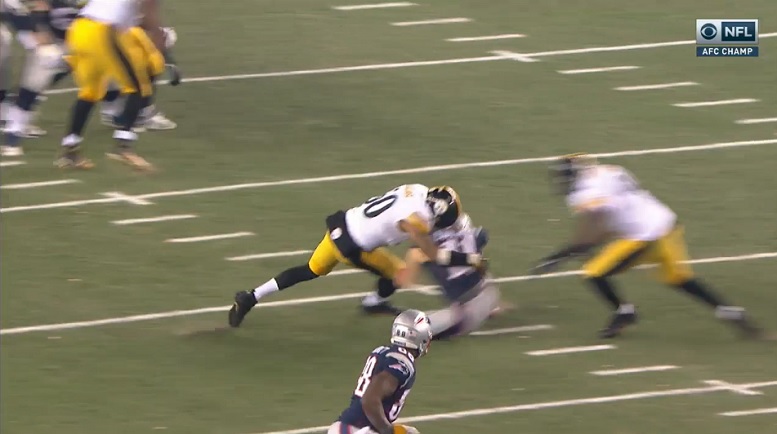 In the third quarter of the Pittsburgh Steelers AFC Championship game against the New England Patriots linebacker Ryan Shazier was penalized 15 yards for a hit on wide receiver Julian Edelman. The penalty was a questionable one at the time and as it turns out, Shazier wasn’t fined for it, according to Ray Fittipaldo of the Pittsburgh Post-Gazette.

Shazier’s hit took place on a 2nd and 5 play from the Patriots 21-yard-line with 12:48 left in the third quarter and with the Steelers trailing 17-9. As you can see below, Edelman was going to the ground as he attempted to catch the football. The flag was thrown a few seconds after the hit occurred by the back-judge and it was the first penalty of the game.

To add insult to injury after the penalty, the Steelers had an unsuccessful challenge of a recovered fumble by Patriots quarterback Tom Brady just three plays later on 3rd and 1 play. That drive, by the way, culminated with a 47-yard field goal by Patriots kicker Stephen Gostkowski that gave New England a 20-9 lead with 10:04 left in the third quarter.

Shazier escaped fines a few times during the 2016 season. In Week 16 he was flagged for unnecessary roughness for a hit on Baltimore Ravens fullback Kyle Juszczyk during the team’s Week 16 game and not fined the week following the game. Additionally, Shazier reportedly avoided a fine for his roughing the passer penalty on Kansas City Chiefs quarterback Alex Smith in the Steelers Divisional Round playoff game.

Shazier is currently in Orlando, Fla preparing to play in his first Pro Bowl.