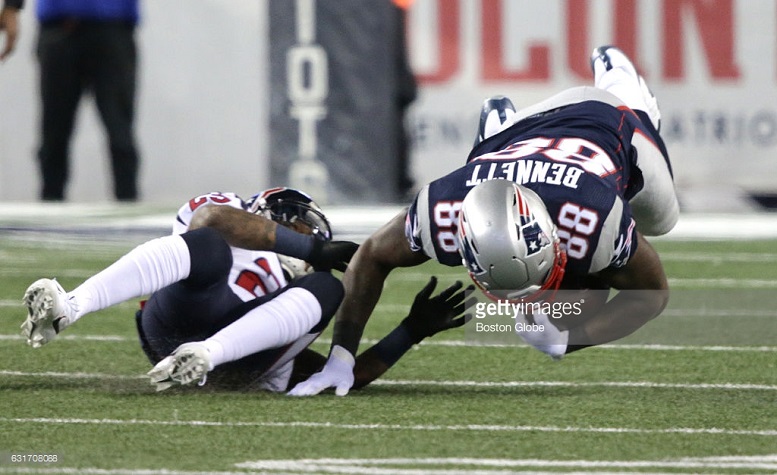 Not only will the New England Patriots be playing without tight end Rob Gronkowski in their Sunday AFC Championship game against the Pittsburgh Steelers, their other top tight end will apparently play in the contest at less than 100 percent.

According to Ian Rapoport of the NFL Network, Patriots tight end Martellus Bennett will play Sunday against the Steelers with a cracked bone and bone chips in his ankle. Bennett, who was limited all three days in practice this past week, was one of seven New England players listed as questionable on the Friday injury report.

Bennett has been banged-up for a good part of the season and he was injured a few times in the Patriots Divisional Round playoff win over the Houston Texans last Saturday. Bennett’s first injury in that game came after a big hit by Texans linebacker Brian Cushing in the first quarter. His second injury came on a non-contact play later in that game and it resulted in him holding his knee.

Bennett, who caught 55 passes for 701 yards and 7 touchdowns during the regular season, caught just one pass for 4 yards in the Patriots playoff win over the Texans. 11 of his catches and 4 of his touchdowns this season came on 3rd down plays as well. It’s also worth noting that 10 of Bennett’s catches this season have resulted in gains of 20 yards or more and that’s just two fewer than Gronkowski had before he was lost for the season back in Week 12.

It will definitely be worth watching how effective Bennett is Sunday night against the Steelers as a run blocker as well as he’s expected to be on the field for nearly every offensive snap. In the Patriots Week 7 win over the Steelers, Bennett caught one pass for 5 yards and only played 30 offensive snaps.