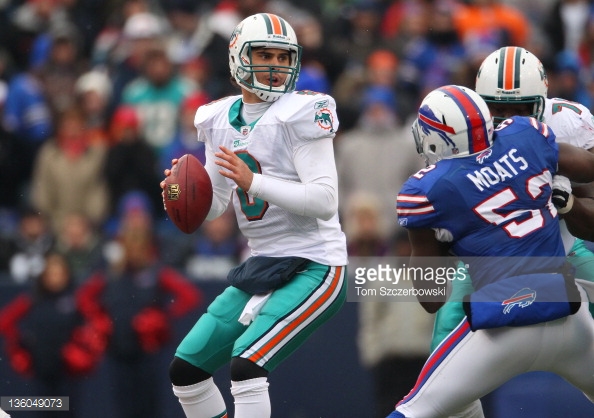 In case there was any question, and Mike Tomlin didn’t even bring it up yesterday so maybe there wasn’t, Matt Moore should be under center for the Miami Dolphins this weekend.

Head coach Adam Gase said barring anything drastic, Moore will get the nod.

Ryan Tannehill still hadn’t practiced on Tuesday or Wednesday, giving a strong indication he wouldn’t be able to suit up this week. Tannehill suffered a sprain MCL and ACL three weeks ago and hasn’t practiced since. He was always viewed as a longshot but given the minor miracle he managed to avoid a full blown ACL, and, as Gase put, his miracle healing abilities, still gave him an outside chance.

But Moore appears to be their guy, a competent veteran. He’s played relatively well in his three starts, lighting up a hapless New York Jets defense for four touchdowns in his first start this season. The next two games were more mild but Moore managed to toss a pair of touchdowns in each game.

For the season, he’s completed 63.2% of his passes for eight touchdowns and three interceptions. He’s been sacked just once in 87 attempts, a great number for him and an area to focus on Sunday.

It’s the most action he’s seen in his career since his first year with the Dolphins when he started 12 games on a really bad Miami team. He’s not going to lead them to a Super Bowl but he’s in a much different, better, tier than the Brock Osweiler’s and Connor Cook’s of the world.