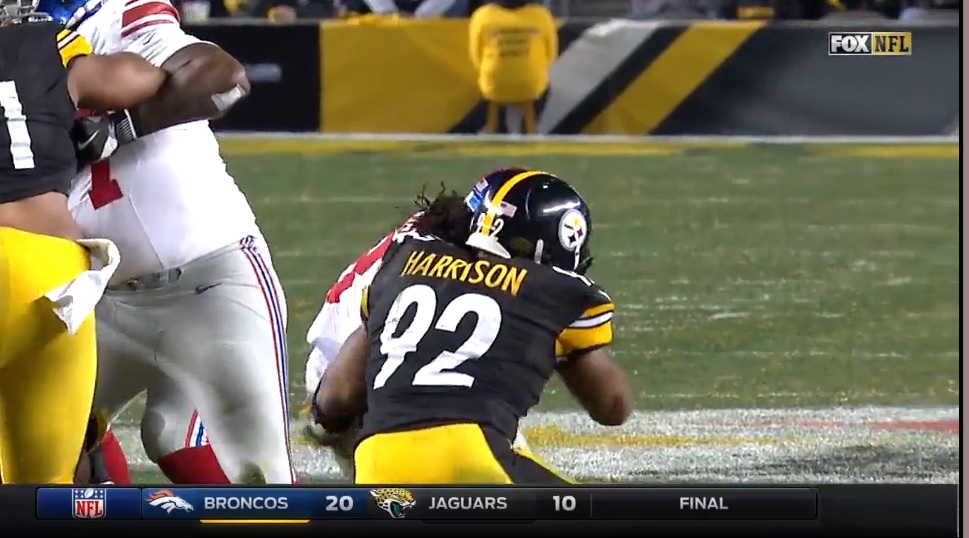 Sunday’s game against the New York Giants marked the third straight win for the Pittsburgh Steelers since dropping four straight.

Once again, the Steelers stuck to the formula that has been working as of late:  pound the ball on the ground, take a few shots here and there through the air and play fast, physical defense.

Like I do every week, I’ll take a shot at grading the positions for the Steelers.

Behind a balanced attack, Ben Roethlisberger was again not asked to do too much for the Steelers, throwing 36 passes, completing 24 of them for 289 yards, two touchdowns and one bad interception.

As of late the Steelers offense seemed to be run-first, which has worked really well. By taking some pressure off of Roethlisberger to try and win games, he’s able to take what the defense is giving him for the most part, allowing him to carve up the opponents when he needs to.

Le’Veon Bell is on some kind of roll right now.

The third-year running back racked up 118 yards on the ground while adding six receptions for 64 yards out of the backfield.

Since the Cleveland game three weeks ago, Pittsburgh has turned to Bell to wear defenses down, allowing the Steelers to not only control the ball and the clock, but it allows them to keep a young, improving defense off the field as much as possible.

As I said earlier, the formula is working, so I see no reason to differentiate from it, especially with the way Bell is punishing defenses.

For what seems like the millionth time this season, the only real production coming from the receiving corps comes from Antonio Brown and very little outside of him.

Against the Giants, Brown hauled in six passes for 54 yards and a touchdown, which happened to be an impressive 22-yard strike from Roethlisberger that Brown made with Janoris Jenkins in coverage.

No word yet if Jenkins took to twitter to say Brown was trash following the game.

Outside of Brown, Cobi Hamilton had two receptions for a measly 11 yards in the win, while Eli Rogers came up with a big third down catch-and-run for 18 yards. Unfortunately for Pittsburgh, that’s the only production the duo contributed on six total targets.

Now THAT’S why Ladarius Green was brought to Pittsburgh as a free agent.

Following a breakout game against the Indianapolis Colts on Thanksgiving, Green one-upped himself on Sunday, hauling in a game-high six passes for 110 yards and a touchdown in the win over the Giants.

New York simply had no idea where Green was most of the time as the big tight end ran free through the Giants secondary more often than not.

If the Steelers are going to make a run here, Green is going to have to continue to put up big games like this week after week to take some heat off of Brown.

Outside of Green, Jesse James was mostly a disappointment again, dropping a pass and struggling at times as a blocker. He just seems very passive as a blocker and lately he’s been prone to mental drops as a receiver, which has caused his targets to drop significantly when on the field.

However, when it came to pass protection the Steelers really struggled at times to protect Ben. In the win, Roethlisberger was hit three times and sacked twice — both by Olivier Vernon working against Alejandro Villanueva.

David DeCastro took a bad holding penalty yet again, while Ramon Foster “kicked” at an opponent after throwing him off the pile. I didn’t much care for that, especially considering the game situation. There are some mental things that need to be cleaned up with this group, but overall it was a strong game for the third straight week.

Although Stephon Tuitt recorded just one tackle in the win, the standout defensive end lived in the New York backfield for much of the game.

Without Cam Heyward, Tuitt has taken a massive step forward with his game, dragging with him a short-handed defensive line.

That group took another blow on Sunday as rookie Javon Hargrave – playing some of the best football of his rookie season — had to leave the game with a concussion, forcing Ricardo Matthews to really step up.

The veteran came in and recorded two tackles and a late sack to help preserve the Steelers lead. It will be noteworthy to see how Hargrave responds to treatment this week because the Steelers are already short-handed up front.

This group has been so good for the last month and a half or so, namely Lawrence Timmons and Ryan Shazier.

Timmons turned back the clock in a big way on Sunday evening, recording a leaping interception that he returned for 58 yards out of the shadow of his own end zone, while also recording seven tackles (three solo).

Shazier finished with just three tackles (three solo), but was instrumental in coverage in the short zone across the middle, which is where Eli Manning loves to throw the football.

On the outside, James Harrison beat Ereck Flowers like a rented mule all game long, easily turning the corner to get downhill towards Manning for much of the game.

In fact, Harrison forced a safety early in the game due to Flowers holding him by the helmet in the end zone. Later in the half Harrison easily dipped under Flowers’ big frame to get to Manning for the sack — his third straight week with a takedown.

Bud Dupree got some action in as well, recording two tackles as the Steelers slowly ease him in.

Man alive, this unit is coming together nicely.

Artie Burns and Sean Davis had pretty impressive days against the Giants’ loaded receiving corps, recording seven tackles each while Davis came up with his first career interception on a great play, saving what looked to be a touchdown.

Along with Burns and Davis, Mike Mitchell had a strong day as well, breaking up two passes while recording five total stops in the win.

Ross Cockrell also recorded five stops (one tackle for loss) and broke up a pass, while William Gay added three stops in the win.

The most impressive thing from this game by the secondary was the fact that they were able to bottle up Odell Beckham Jr.  Sure, the New York receiver hauled in ten passes for 100 yards, but he didn’t find the end zone and didn’t get the chance to break open the game with a big run-and-catch.

With Chris Boswell sidelined due to an injury, Bullock — signed on Saturday — drilled all three field goal attempts and both extra points, allowing Steelers fans to breath easy with a new kicker in the mix for at least one game.

Outside of Bullock, Jordan Berry continues to dominate week after week. Berry punted just four times in the win, dropping two punts inside the 20-yard line, forcing the Giants to traverse a long field if they wanted to score.

Berry is turning into a real weapon for this franchise.

Kickoff coverage needs to improve though as Bobby Rainey returned a kickoff 38 yards against the Steelers, giving the Giants great field position to start a drive. That’s two straight weeks now that the Steelers have allowed a kickoff return of over 35 yards.