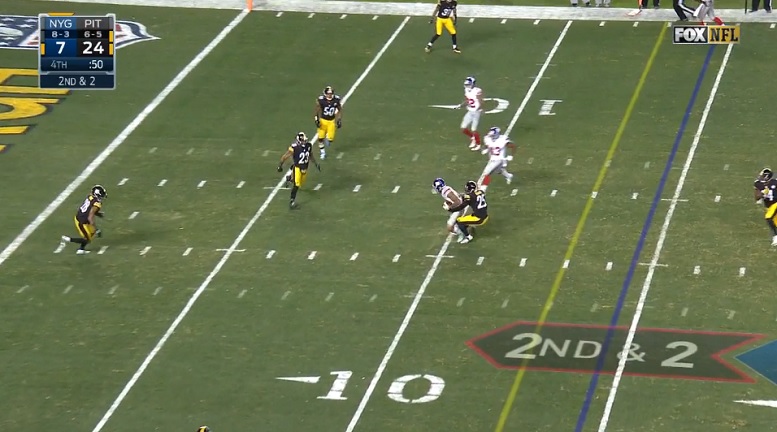 Statically speaking, New York Giants wide receiver Odell Beckham Jr. had a good game Sunday against the Pittsburgh Steelers as the former first round draft pick caught 10 passes for 100 yards. In fact, when it comes to both of those statistical categories, Beckham exceeded his 2016 per game average.

However, when you watch the tape from Sunday’s game and dig deeper into the stats, you’ll see that Beckham really didn’t have that great of game against the Steelers.

For starters, Beckham only registered one catch for 10 yards in the first half of Sunday’s game against the Steelers. Sure, he had a 15-yard reception wiped out by a holding call, but the fact of the matter is that it didn’t count.

In the second half, Beckham registered 9 receptions for another 90 yards. Two of those receptions, however, came within the final 1:26 of game-time with the Steelers ahead 24-7.

Ahead of Sunday’s game, I wrote this in my weekly 7 keys post:

The Steelers aren’t going to completely shut down Giants wide receiver Odell Beckham Jr., but they can limit his YAC (yards after the catch) on Sunday which will really help in the hidden yardage department. 37.3% of Beckham’s receiving yardage this season has come after the catch and he averages 5.2 extra yards after every grab. 4 of Beckham’s 8 touchdown receptions have been from 26 or more yards out with two of those being 66 yards or longer. There was a lot of YAC allowed on those plays and the Steelers defense must keep him in front of them in this game and hopefully out of the end zone as well.

So, how did the Steelers defense ultimately handle Beckham in the YAC department? In a word, fantastic.

On his 10 total receptions, Beckham registered just 13 yards after the catch and 11 of those came on his 1st and 10 reception with 8:22 left in the fourth quarter against a very soft coverage look that included the cornerbacks playing off and two safeties deep.

On Beckham’s other 9 receptions in the game, 7 of them included him being tackled for zero or negative yards after making the catch. In case you’re curious, Steelers rookie cornerback Artie Burns was responsible for 3 of those 7 tackles while rookie safety Sean Davis had one as well. If you’re scoring at home, Beckham averaged just 1.3 of YAC on his 10 receptions against the Steelers.

As a whole, Burns and fellow Steelers cornerback Ross Cockrell did a very good job when it came to each of them covering Beckham on Sunday even though fantasy-wise it might show that they didn’t.