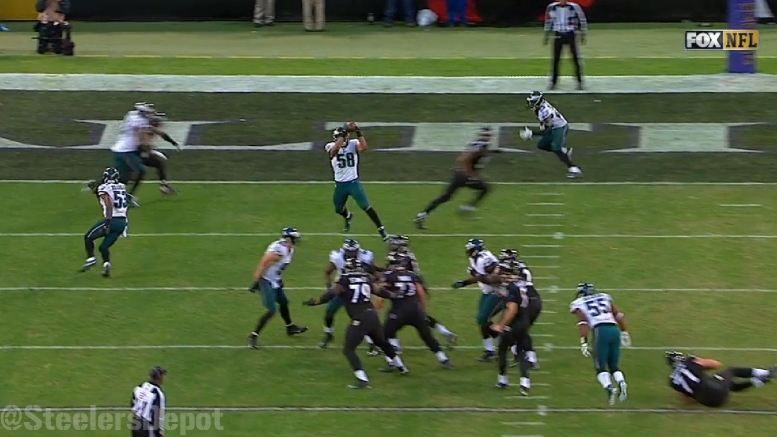 The Baltimore Ravens know they almost let one get away on Sunday against a struggling Eagles team that has only won two games since starting the season 3-0, including a victory over the Pittsburgh Steelers in that third game. The Ravens kept themselves in striking distance of their division rivals by fending off a late rally that came down to a daring final play.

The Eagles scored a touchdown with the clock reading just four seconds to play in the fourth quarter. That score made it a 27-26 ball game, but instead of opting for trying to tie the game with an extra point attempt, the team helmed by a rookie head coach and a rookie quarterback tried to run a two-point play to go for the win.

That attempt failed, and so did the ensuing onside kick, which sealed the Eagles’ defeat, and the Ravens’ victory, but they know that they narrowly escaped with that one, and that they have only themselves to blame for it. Specifically, Head Coach John Harbaugh took the blame for getting the Eagles’ momentum rolling in the fourth quarter because of an offensive play call that produced a negative play.

With 6:21 remaining in the fourth quarter, the Ravens were working to close out the game with a 10-point lead. Joe Flacco just hit Mike Wallace for a 54-yard strike that put the offense all the way down to the Eagles’ 11-yard line, poised to strike. And so they did try to strike. They put the ball in the air, and it was intercepted, and returned to the 40-yard line.

While it wasn’t Harbaugh that drew up that play, he took the blame for not vetoing it and instead working a more conservative strategy that would do more to protect the football. Though they didn’t run much, they were running very efficiently, and Harbaugh regrets not putting the ball on the ground.

“I’ll take responsibility for it”, Harbaugh said of the decision to throw it there. “I should have vetoed it right away. I like an aggressive mindset, but that was way too aggressive. It’s the worst play call we’ve had, and it’s my fault. It should have never happened”.

It should probably be pointed out that the Ravens are already on their second offensive coordinator of the season. But be that as it may, the interception ignited the Eagles, who were able to turn that interception into a field goal, and then the defense responded with a three-and-out.

Philadelphia then drove 59 yards down the field in under two minutes for the score, but their own aggressiveness resulted in their defeat as well—much to the Ravens’ delight.

Had Baltimore failed to win that game, they would have put themselves in a position in which the Steelers would be able to win the division despite losing twice to them. And they probably like their odds of being able to beat Pittsburgh. Now, for both teams, it very nearly becomes a one-game season.