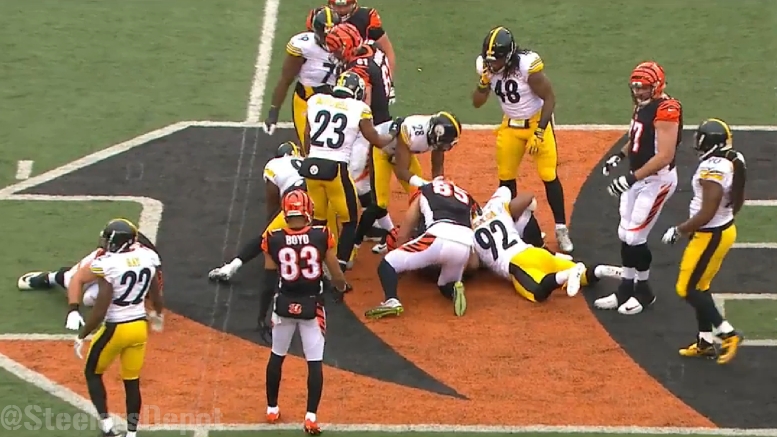 One time is a fluke; a coincidence. Two times is a pattern. But in this instance, I think we can probably safely say that the Pittsburgh Steelers’ abandoning the idea of the rotation at the outside linebacker position is now a trend, and a reality, as for the second week in a row, they have essentially only used two players at those positions, minus just one snap.

Five games ago, the Steelers demoted Jarvis Jones and inserted veteran James Harrison into the starting lineup. Harrison leads the team in sacks with five, all of which have come over the course of the past seven games since their bye week, though he has not recorded a sack in the past two games.

Playing on the opposite side of Harrison is second-year player Bud Dupree, who was their pick in the first round a year ago. He cracked the starting lineup by the end of his rookie season, during which he recorded four sacks, but he spent most of his sophomore year on injured reserve, and he only recently been slowly rotated back into the scheme of things.

But over the course of the past two games now, Dupree has played all but one snap, coming off the field just one time, with Anthony Chickillo filling in on that snap, which proved to be a touchdown. Not that it was Chickillo’s fault, as he recorded a pressure on the play. Missed tackles in the secondary were the culprit for the explosive touchdown.

As for Harrison, he has not come off the field over the course of the past two games, something that used to simply go without saying back in the heyday of his career. The 38-year-old has been saying for two years now since returning to the Steelers that he did not feel as though he needed the time off that the coaching staff was demanding of him.

As for Jones, he was one of just two players on the active roster on Sunday to not even see a single snap, with the other being the Steelers’ backup quarterback, so that should probably say a lot. Chickillo is a fixture on special teams, while Arthur Moats at least saw three snaps in that capacity on Sunday. Jones did not even get that. In other words, he might as well be on the inactive list.

Between the two, the pair of Harrison and Dupree registered 12 tackles on their 58 defensive plays, meaning that they had a proportionally pretty strong showing in terms of making an impact on the game. Harrison in particular was active with nine total tackles, three of which went for ‘stops’. Dupree also registered two stops on his three tackles. Each of them registered a tackle for a loss of at least three yards.

It is almost hard to believe that the Steelers spent most of the season relying so much on Jones, Moats, and Chickillo at the outside linebacker position. They now have their two best players at the position on the field for every snap—and that may prove to be true next year as well.