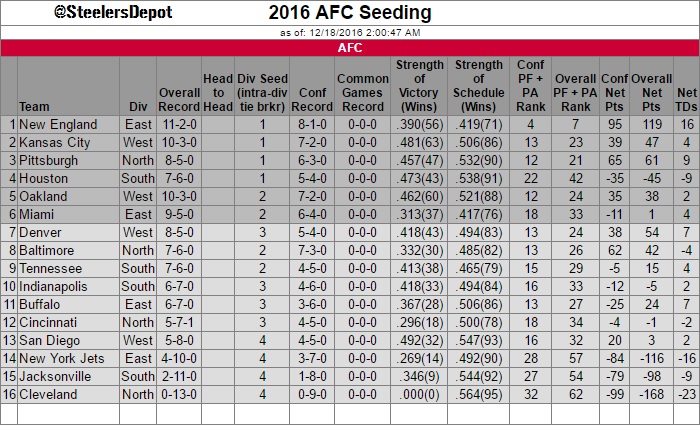 With three games left on their 2016 regular season schedule, the Pittsburgh Steelers can finish as the No. 2 or No. 3 seed in the AFC if they win out. A loss Sunday to the Cincinnati Bengals would of course be very disappointing, but in the grand scheme of things won’t be a big deal for the Steelers as long as they win their final two games at home.

So, do you have to scoreboard-watch on this Week 15 Sunday? No, not really, but if choose to, below are four games worth keeping your eye on.

Philadelphia Eagles (5-8) at Baltimore Ravens (7-6) – Sure, the Steelers control their own destiny during the final three weeks but that doesn’t mean we shouldn’t root against the Ravens on Sunday. A Steelers win Sunday combined with a Ravens loss would make the Christmas day game pretty much meaningless. With that said, I think the Ravens have never lost to a rookie quarterback in Baltimore so Eagles quarterback Carson Wentz will face a tough task on Sunday. Fly, Eagles, fly.

New England Patriots (11-2) at Denver Broncos (8-5) – With the Miami Dolphins winning Saturday night, they’re now the No.6 seed in the AFC entering Sunday. They will remain there to close out Week 15 should the Broncos lose to the Patriots on Sunday. I don’t know about you, but I would love to see Miami have to travel to Pittsburgh in the playoffs. Pull for the Patriots again in this one just in case.

Tennessee Titans (7-6) at Kansas City Chiefs (10-3) – The Steelers can’t catch the Patriots for the No. 1 seed in the AFC but they can still grab the No. 2 seed which currently belongs to the Chiefs. The Steelers are two games behind Kansas City entering Week 15 but do own the head-to-head tiebreakers. Go ahead and pull for the Titans to win this one on the road and to lose at least one more in their final two games.

Oakland Raiders (10-3) at San Diego Chargers (5-8) – If the Chiefs lose Sunday and the Raiders win, the latter will lead the AFC West with two weeks to go. The Raiders would also have the inside shot at the No.2 seed in the AFC as well. The Chargers were officially eliminated Saturday night when the Dolphins won, but even so, this is a divisional game you know they’d like to win at home. Go, Chargers, go!