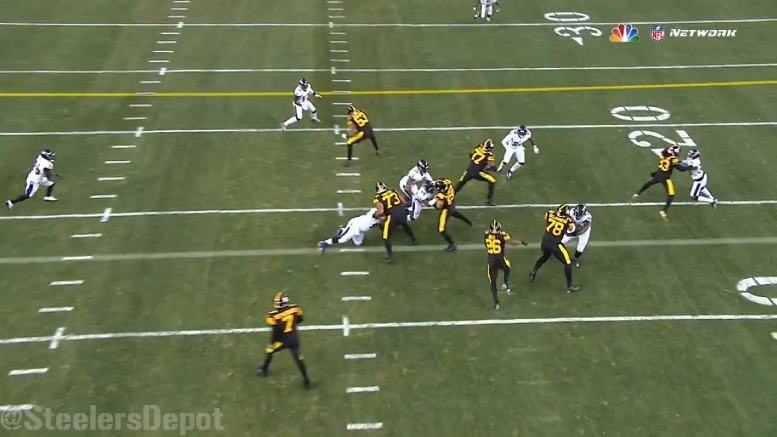 We haven’t really talked a whole lot about Alejandro Villanueva this season, the Pittsburgh Steelers’ primary starting left tackle for the past two seasons. He is at a point in his career in which his backstory doesn’t need to be retreaded in every discussion about him. His play now speaks for itself. And it has a lot better things to saw lately in comparison to the start of the season.

There are many things about Villanueva and his background that make him quite rare in this league, and his 6’9”, 320-pound frame is a good starting point. But more impressive than his sheer size is the athleticism that goes along with it.

In fact, they even pulled him as a lead blocker on the first play of the game. After Le’Veon Bell checked out of the right slot to the left sidecar in the backfield, Villanueva pulled around right tackle and picked off the edge defender, behind which lane Bell ran for a 10-yard gain to start the day.

And it wasn’t the only time he pulled in the game, either, doing so on a couple of other occasions, but those instances were merely window dressing or as part of an exotic protection package in the passing game. But the fact that they are comfortable getting him on the move frequently speaks to his development and his own comfort level in addition to his athleticism.

Later on that opening drive, he made good use of that athleticism and showed off his footwork working against Terrell Suggs in pass protection. With the tight end coming off the line, Villanueva had to open the gate wide and slide around the pocket to mirror the pass rusher, and he did it adeptly and with obvious athletic ability.

Still on that opening drive, he helped open a running lane off left tackle on second and four to help Bell gain six yards, holding off the right defensive end after getting a chip from his tight end until after the first-down was secured.

The big left tackle continued to put in good work in the run game later in the first quarter. On the first play of the Steelers’ second drive, he provided a strong chip on the nose tackle to kick him inside to the guard before moving out to the second level to knock the inside linebacker far off of a pursuit angle on a six-yard run from Bell around the left side.

Early in the second quarter, he took advantage of a wide set from the right defensive end, sliding into an angled position immediately to his inside shoulder to seal off the defender on a six-yard running play from Bell that went through the left-side B Gap.

He really played well from the beginning of the game to the end, but he looked like he would get another shot at Suggs on the Steelers’ penultimate offensive play before the game-winning touchdown. On the nine-yard pass to Jesse James that set up first and goal from the four-yard line, as a matter of fact, Suggs stunted inside, with Timmy Jernigan instead rushing outside.

Villanueva calmly handled the stunt as though it were second nature to him, which shows how much progress he has made over the course of the past few years. The man who was moved to wide receiver his senior year of college even though his team needed linemen; who went undrafted; who failed to make a roster three times until his age-27 season: that man is the starting left tackle for a Super Bowl contender, and they are more than happy to have him.