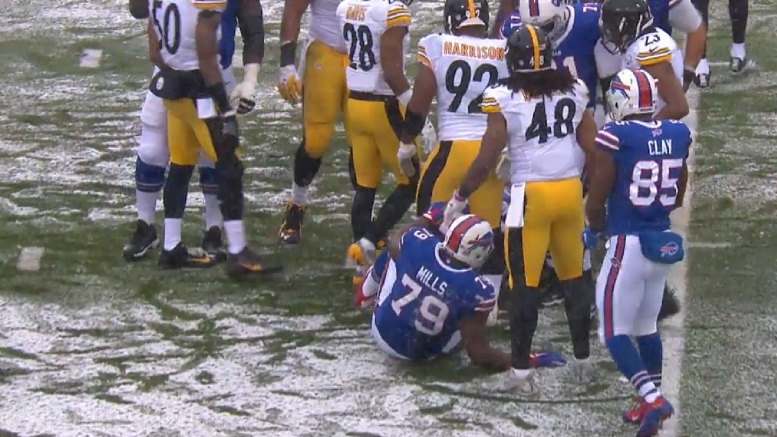 The Pittsburgh Steelers faced just 48 plays on defense, which is pretty amazing when you consider that the Bills didn’t exactly have a lot of successful short drives or chunk plays. They did have one scoring drive that took just a couple of plays, but Pittsburgh had a nearly two-to-one ratio in terms of time of possession.

Not that that is really my point for this article, but it is one thing to take into consideration when you evaluate the fact that the Steelers, for the first time the entire season did not rotate their outside linebackers. There was a sharp shift in that direction against the Giants, but Sunday’s game seems to have solidified their move away from the rotation, about which Head Coach Mike Tomlin apparently no longer wants to answer questions.

But on Sunday, the Steelers played 48 snaps on defense. James Harrison played 48 snaps. Bud Dupree, who is still working his way back from a sports hernia injury, played 47 snaps. Anthony Chickillo played one snap. Jarvis Jones and Arthur Moats combined played three snaps—on special teams. The rotation is over.

That is, if the results from the Bills game can be safely extrapolated to predict future results. As mentioned, however, 48 snaps is comfortably below the average that a defense is going to see, and it is conceivable that the Steelers may spell Dupree for a series or two in a more snap-intensive game due to his limited activity this year.

Considering that the Steelers have not really formally said anything about the rotation in a while—and based on Tomlin’s comments, that does not appear to be changing any time soon, perhaps deliberately—it’s really not possible to say for certain whether or not this was simply the strategy for one game, or whether it was influenced by the lack of long drives and total snaps.

It should be noted, for example, that the one play that Chickillo saw on defense just so happened to come on a play on which the Bills scored on a long touchdown. One might be able to assume that he would have seen more than one snap if Buffalo had not scored so quickly, and instead authored a longer drive.

Dupree had just gotten done trying to chase down a 41-yard reception and then got after the passer on the following play when he checked out of the game—whether he checked himself out or the coaching staff did is not clear.

But Chickillo came onto the field on the next play and actually did get pressure on the quarter, rushing from the right side, and registering a hit on the quarterback, on the play that ended up scoring.

Dupree was back into the rotation for the next defensive possession, which came after an extended field goal drive by the offense, and he finished out the game. It will be interesting to see what sort of workload the trio of Chickillo, Jones, and Moats sees against the Bengals, as that will be more telling in establishing or bucking a trend.