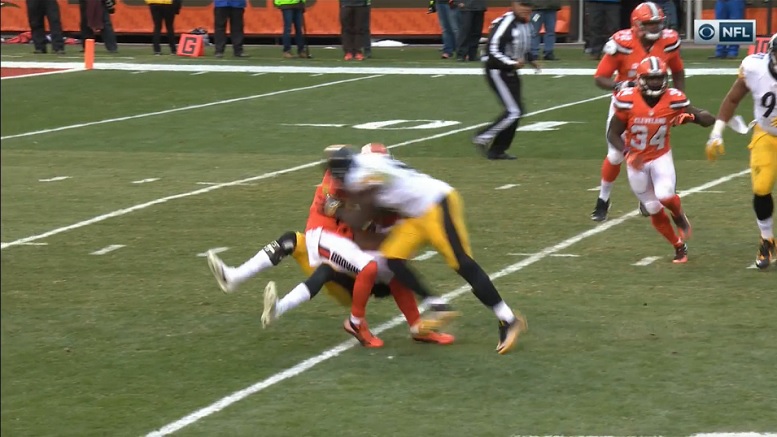 The Pittsburgh Steelers win Sunday over the Cleveland Browns featured several big hits and at least one of those is sure to result in a fine.

Steelers linebacker Lawrence Timmons will likely be fined next week by the league for his late hit on Browns quarterback Cody Kessler with 3 seconds left in the third quarter of Sunday’s game.

On the play in question, Kessler escaped the pocket while being pursued by Steelers linebacker Ryan Shazier. After getting rid of the football, Timmons proceeded to hit Kessler in the head and neck area and was subsequently penalized for unnecessary roughness. Because of the hit, Kessler left the game with a concussion and did not return.

Earlier this season, Timmons was fined $9,115 for his late hit on Philadelphia Eagles tight end Trey Burton. Being as this is Timmons’ second late hit offense this season, he’s likely to be fined $18,231 by the league.

In the fourth quarter of Sunday’s win, Timmons was also flagged for illegal use of hands on a 3rd and 17 play. The penalty kept the Browns drive alive but their ultimately stalled at their own 41-yard-line.