It’s great to be back with you after a trip out West and a Bye Week. Buckle up for the Pittsburgh Steelers stretch run after they stumbled through the AFC East portion of their schedule in October.

As always, the Steelers can never have it easy. Whether it is suspensions or injuries, this team will find a way to keep us all on the edge of our seats. Once again, it is Ben Roethlisberger who is injured leading up to a Ravens game in Baltimore.

It seems uncanny how many times Big Ben has missed games against the Ravens and there is no guarantee that he is back this week. The Steelers doctor told Ben that his game day availability is solely based on Ben’s pain tolerance. Steelers’ players have mentioned that Ben looks good but they would be surprised if he plays.

I have a feeling that the team may hold Ben out this week to give him more rest before the Dallas game next week. For now, I will project Ben and the Steelers offense as if he is playing but I will not be shocked if he doesn’t play.

In either case, you may want to keep Roethlisberger on your fantasy bench this week. Ben has never had a top-12 (QB1) scoring quarterback in any of his eight career games in Baltimore. In those games, Ben has thrown only seven touchdowns compared to 11 interceptions. It is no secret that Ben and the entire Steelers team has struggled in M&T Bank Stadium.

Take a look at the chart below from RotoViz. The “In Split” portion of the table on the left side shows just how poor Ben has played in Baltimore over his past four matchups there. Ben is averaging .75 passing touchdowns per game and 1.5 interceptions in those four games against the Ravens since 2011. 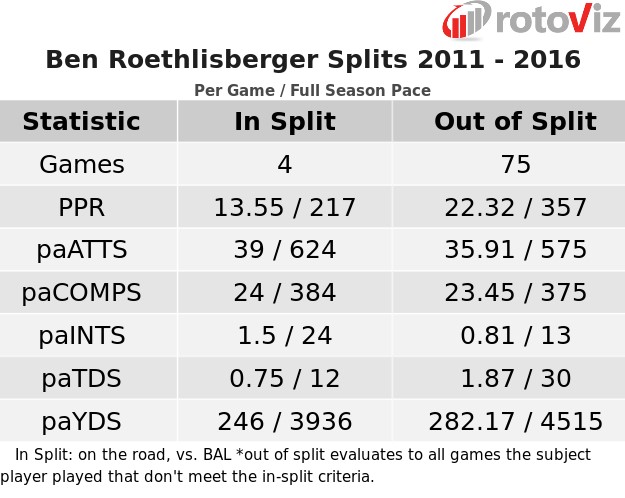 As for 2016, the Baltimore defense has been up and down this season with Terrell Suggs returning from injury and the addition of safety Eric Weddle. After 7 games, the Ravens have surrendered 16.7 fantasy points per game to opposing Quarterbacks. They are allowing 234.6 passing yards and two touchdowns per game.

The Pittsburgh offense will likely try to work the underneath and quick passing game with a lot of Le’Veon Bell rushing the football. Don’t expect much from Ben this week from a fantasy perspective.

The wide receivers obviously will go as Ben goes. News out of the bye week indicates that Darrius Heyward-Bay has been promoted to a starter and Sammie Coates is not listed on the injury report with his broken finger. Markus Wheaton may return but it won’t make a difference for your fantasy team.

Antonio Brown was even nicked up in the Steelers last game against New England. His hip pointer has improved from all reports and will be at full speed against the Ravens.

Take a look at Antonio’s stats in the same four games that were shown in the graphic above detailing Roethlisberger’s performance against the Ravens in Baltimore. 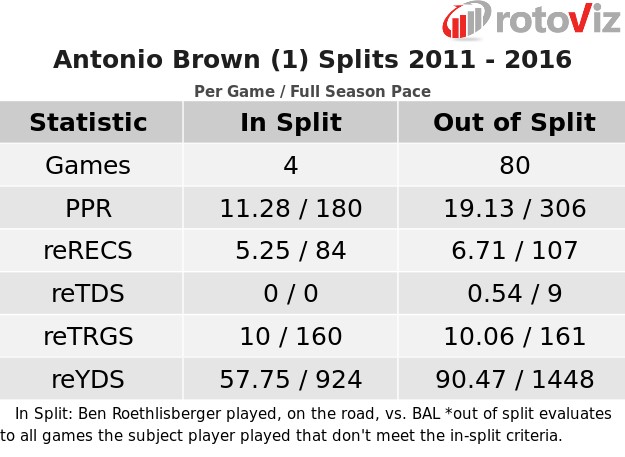 Brown has not scored a touchdown in four road appearances in Baltimore with Ben at the helm. His receptions are down slightly from his career average but his yards, touchdowns and PPR fantasy points are nearly cut in the half in Baltimore.

This is shaping up to be an ugly game on Sunday that will likely be won by the better defense and the field goal kickers but there may be something here for Antonio Brown or Sammie Coates. The Ravens are surrendering the 3rd most fantasy points per game to opposing wide receivers. They are giving up 1.9 touchdowns per game to opposing wide receivers. Maybe AB does get his first career touchdown in Baltimore in this spot.

You are obviously going to play AB in your season long fantasy leagues, but I would avoid him at his price tag in daily leagues. Coates is no more than a flex play but there is that chance that he connects with Ben on a deep ball.

Jesse James’ time as the Steelers starting tight end may be coming to a close with Ladarius Green nearing his return from the PUP List. The Ravens and their athletic linebackers have always been stingy against the tight end position.

This year they seem to be even better with Eric Weddle patrolling the back end of the defense. The Ravens are allowing the 2nd fewest fantasy points in the league to opposing tight ends.

They only allow 3.6 fantasy points per game to tight ends. James is not in play here and Green is no lock to be active this week.

Le’Veon Bell continues to dazzle with his incredible talent at the running back position. Since returning from suspension in Week 4, Bell has been a top 12 scorer at the running back position in each week he has played. Bell has done that without scoring a single touchdown so far this season. Bell is so effective because he consistently posts high yardage totals. He and David Johnson are in a class of their own as the only backs to have over 100 scrimmage yards in every game they have played this year.

To put Bell’s career thus far in a capsule; he only needs 82 scrimmage yards on Sunday to pass the great LaDanian Tomlinson (7th all-time) on the all-time leaders list for scrimmage yards through a players first four years.

Baltimore has limited opposing running backs to 73.1 rushing yards per game so far this season. Bell won’t find a lot of room on the ground but he should be able to do damage in the passing game. Against New England, Bell posted 10 receptions on 13 targets for 68 yards.

Look for Bell to break his touchdown drought and see a heavy workload on Sunday as the featured offensive weapon against Baltimore. He is worth paying up for in daily leagues even in a relatively tough matchup.

Kicker Chris Boswell has been extremely disappointing from a fantasy perspective and on field perspective as he missed two kicks last game against the Patriots. However, he did get five attempts last week. The Steelers and Ravens have played 12 of 16 games since 2008 within three points, by far the most among any rivals in the NFL. I believe touchdowns will be hard to come by in this game and Boswell could put the Steelers over the top if he is effective in the kicking game. However, be aware that Baltimore allows the fewest fantasy points per game to opposing field goal kickers.

On paper, the Steelers are a better team than the Ravens. They have the better quarterback, running back, wide receivers and overall team speed. However, coaching has been a huge factor in this rivalry since Tomlin took over. Quite frankly, Harbaugh has had the upper hand, winning nine of the past 14 matchups since 2010. The Ravens have defeated the Steelers three straight times overall and three straight times in Baltimore. Call me crazy, but I have a feeling the Steelers will stop the streak in a close game (shocker) on Sunday.