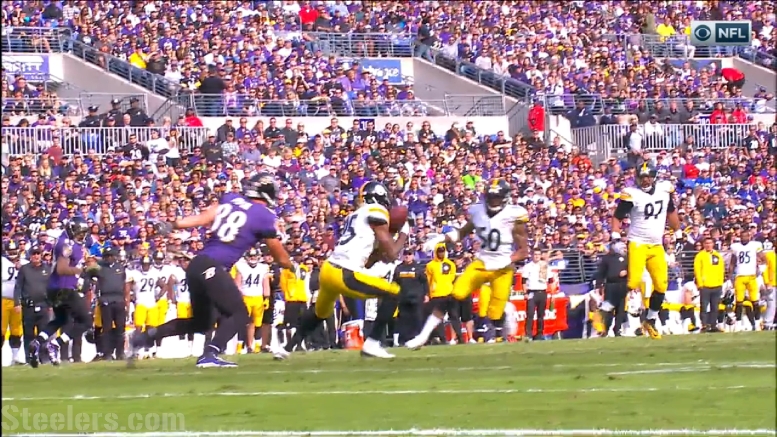 While the offense was pretty much terrible for three quarters, outside of one disastrous 95-yard touchdown pass to former Pittsburgh Steelers wide receiver Mike Wallace, the defense was actually relatively solid overall. On the field, they gave up just one touchdown and two field goals, with one coming off a short field due to a batted pass interception.

To be sure, there were certainly plenty of things over the course of the game to be critical of the defense about, when you factor in all variables, they held up their end of the bargain today, while the offense did not. And they even flirted with the potential to be the difference-maker.

Relatively early in the game, the Ravens were driving down the field after starting from their own 33-yard line, having gotten as close as the Steelers’ 16 before things started trending in the opposite direction.

Following a one-yard loss on second and five, an illegal shift by the Ravens negated a first-down reception for eight yards. On the ensuing third-down play, the Steelers brought the blitz and pressured Joe Flacco, who looked back across the field to try to find his tight end, but instead found rookie cornerback Artie Burns cutting in the way for the turnover.

Unfortunately, the Steelers offense was unable to capitalize on the interception, yielding no points off of turnovers on the day—while the Ravens got 11 when the blocked a punt that they returned for a score and an ensuing two-point conversion (though not technically considered a turnover), plus a field goal off an interception.

But Pittsburgh flirted with another turnover soon after the first one. Early in the second quarter, on the first play of a Ravens drive, Ryan Shazier knifed through the line of scrimmage, blowing up the running back and getting his body on the ball, popping it loose. It squirted toward the end zone, but Baltimore was able to recover at the three-yard line.

While James Harrison’s first sack of the day was completely a coverage sack, his second was not, and it could have been a huge moment in the game. Coming just at the end of the fourth quarter, he beat the left tackle around the edge and tomahawked the ball out of Flacco’s hand.

It went down as a sack for Harrison at the 28-yard line of the Ravens for a loss of nine yards, but when a Baltimore lineman came out of the fray with the ball, the home team was able to punt to prevent Pittsburgh from having a short field.

In fact, instead of having a short field, the Steelers ended up trying to punt from their 33-yard line, which is when the Ravens blocked the punt and had a scoop and score that at the time made it a 21-0 ball game.

There were a lot of things about this game that were terrible, but the Steelers still had their chances in this one. The Ravens just did a lot better at finishing their chances at causing turnovers, and then in turning them into points when they got them.