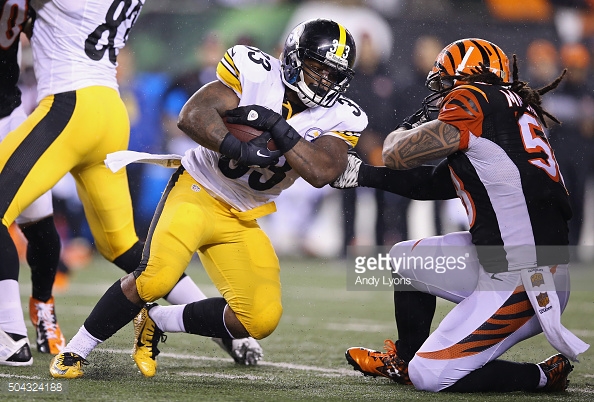 The Cincinnati Bengals have not played a game in a while, and the last game they played, they neither won nor lost. But what they may have lost in the interim is their starting middle linebacker, Rey Maualuga, whom Bengals head coach Marvin Lewis declared as out heading into tomorrow night’s game against the Giants.

Maualuga, the eighth-year veteran, has not missed a game this season. But he has missed plenty of time over the course of the year, and the bottom line is that he is no longer a full-time starter. Vincent Rey has spent a lot of time manning the middle linebacker position for the team, and has logged the second-most snaps among the team’s linebackers behind Karlos Dansby.

More concerning for Cincinnati is the fact that they are not clear on Maualuga’s future for the remainder of this season. according to the team, the veteran is dealing with some type of leg injury, the extent to which it is a concern is not yet altogether clear.

The possibility very much exists that whatever he is dealing with is an injury that will end his 2016 season, which will in turn be a significant blow to the Bengals’ depth chart. Rey and Dunlap will probably absorb a lot of those snaps.

But also in the mix is rookie third-round draft pick Nick Vigil, whom the team has been high on since they brought him in back in the spring, and whom they actually have been talking about getting more involved on the other side of the bye week.

While the rookie has only seen 11 snaps on the defensive side of the ball over the course of the first half of the season, he is expected to finish the year with a considerably higher number of snaps than that. One might assume that he will rotate with the outside linebackers in coverage situations, for example, to take advantage of his youth and mobility.

While he has not been seeing time on defense, however, Vigil has logged a considerable amount of time on special teams, playing 153 snaps through the first half of the season, which puts him on pace to play over 300 special teams snaps on the year. He has seen action on over two thirds of all of the Bengals’ special teams snaps.

On the season, Maualuga has played in eight games, starting five, and recording 20 tackles. He had a season-high seven tackles against the Steelers in Week Two, three more than in any other game. He has just nine tackles in his last five games. He had 75 tackles in 15 games with 14 starts in 2015.

Rey, meanwhile, has started five games, recording 37 tackles, three passes defensed, and an interception. The veteran Dansby, whom the Bengals just brought in this year via free agency as depth initially, has 54 tackles in four starts with three pass deflections. It will be interesting to see how their playing time is split when Vigil is introduced into the equation.