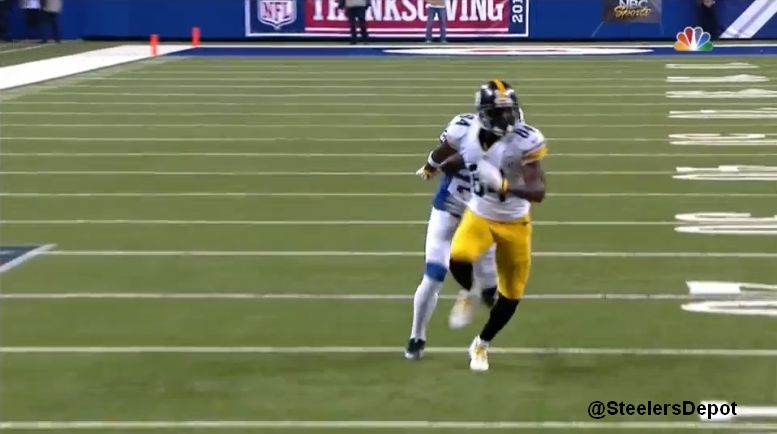 If you haven’t heard, and let’s be honest, I know all of us in this conversation have, Antonio Brown is the NFL’s best wide receiver. And he’s the NFL’s best route runner.

There may be no better example of that than what he’s done the last two weeks. It’s a lot of fun when we can show two very similar plays and the differences between them that highlight what makes him so great.

Brown had a great game last night against the Indianapolis Colts. Five catches, three touchdowns. Hard to be any better than that. And while all three touchdowns were impressive, it was his second score, midway through the second quarter, that caught my eye the most.

Before we show you that play, it’s more important here to understand what he did on Sunday against the Cleveland Browns. It was a nice play but relatively nondescript, probably forgotten by most of us in our turkey-induced comas. A 21 yard pickup late in the second quarter.

It’ll read as a deep out route but there’s so much more to it. I usually show the play last but let’s look at the whole thing first.

Brown is in a reduced, or narrow, split. He has a free release off the line and begins to widen initially, creating space for him so he won’t get squeezed by the corner. 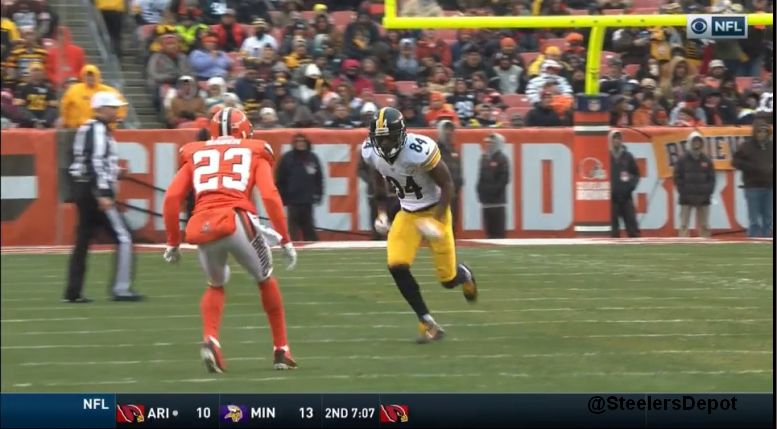 He then stems upfield, shoulders, hips, and eyes all signaling like he’s going downfield. That gets cornerback Joe Haden, the Browns’ top corner, to open his hips and respect that deep threat. He has to assume Brown is running vertically and must protect himself. 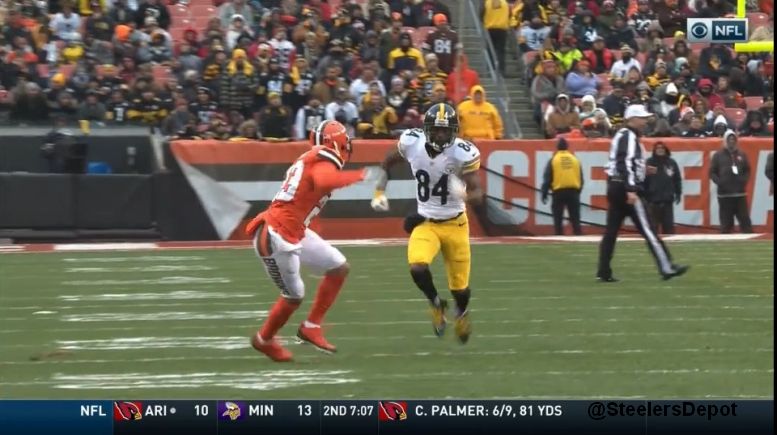 As soon as Haden opens up, Brown changes directions again, doing an incredible job of being able to drop his hips and make his out cut. With Haden opening up his hips, he loses his vision on Brown and is late to react to the cut. 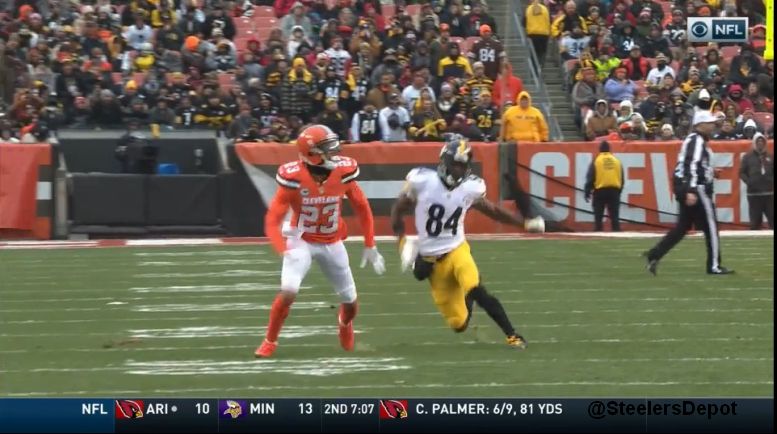 Brown gets a ton of separation and makes the grab on the sideline. No chance for Haden to make the play. 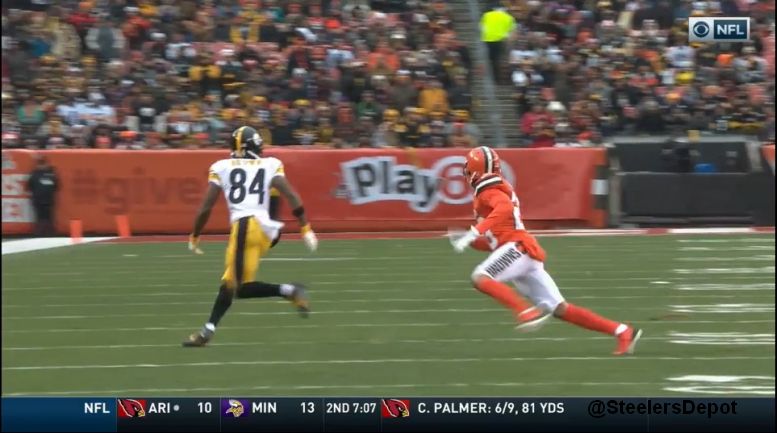 Fast forward to today. Same split, a reduced one, working on Vontae Davis. He begins to widen his split just like he did against Haden. 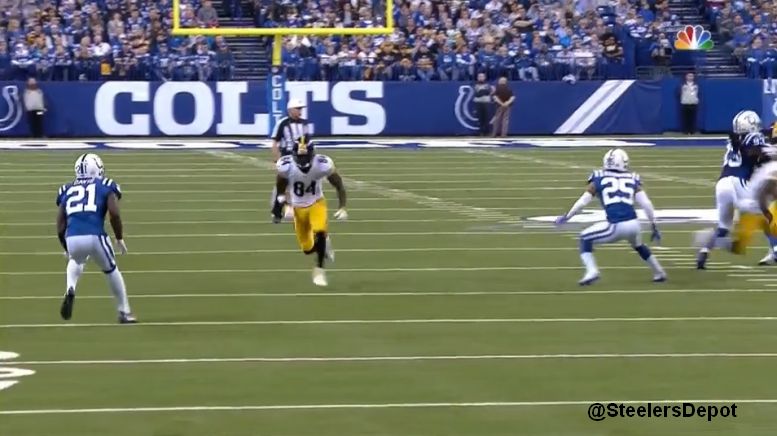 He then stems upfield, shoulders, hips, and eyes square like he’s going to run vertically. 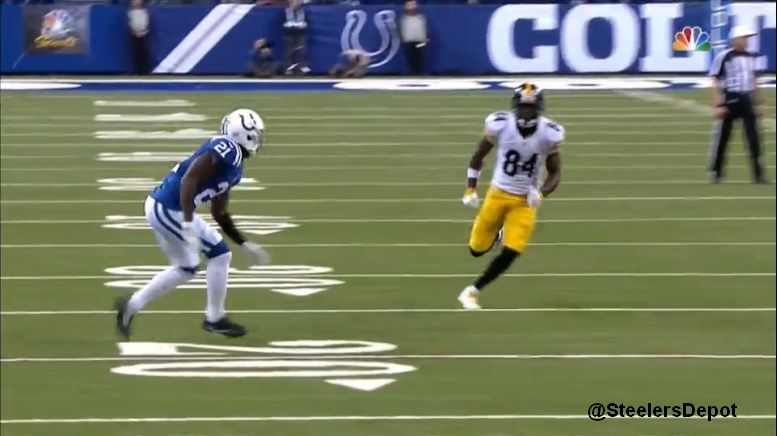 He begins to break back inside, like he did with Haden. But Davis doesn’t have the cushion that Haden did and hasn’t opened up his hips as much. 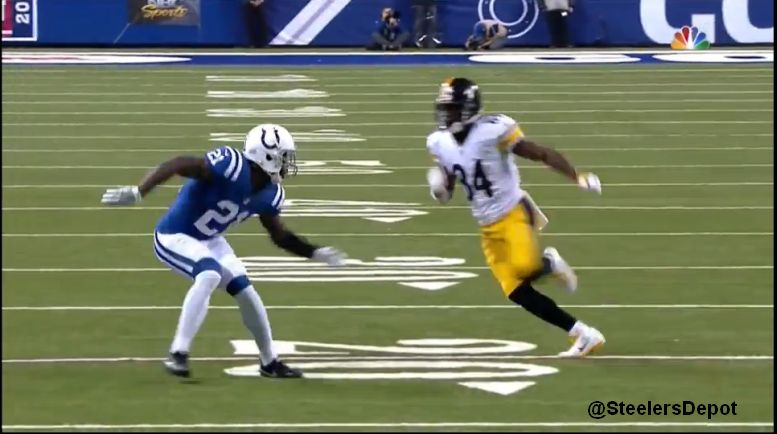 So Brown converts his route, again, by planting and getting upfield. He fights through Davis, swaps hips, and stacks on top of him. Davis is now trailing Brown and there’s nothing he can do to stop the throw. 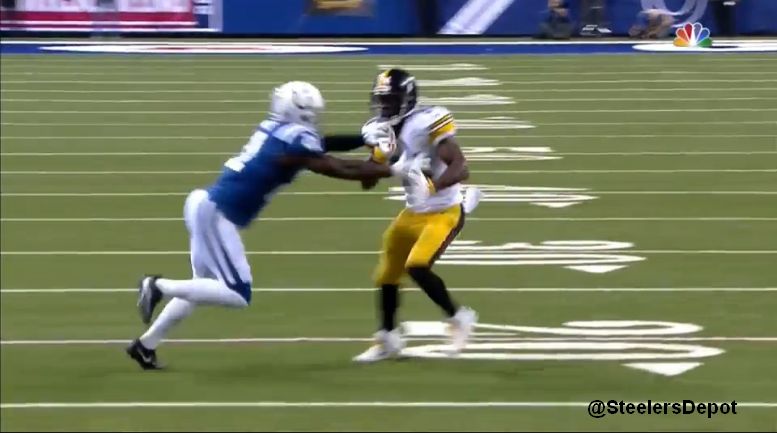 He finishes the play with a phenomenal toe-dragging play with his back foot. 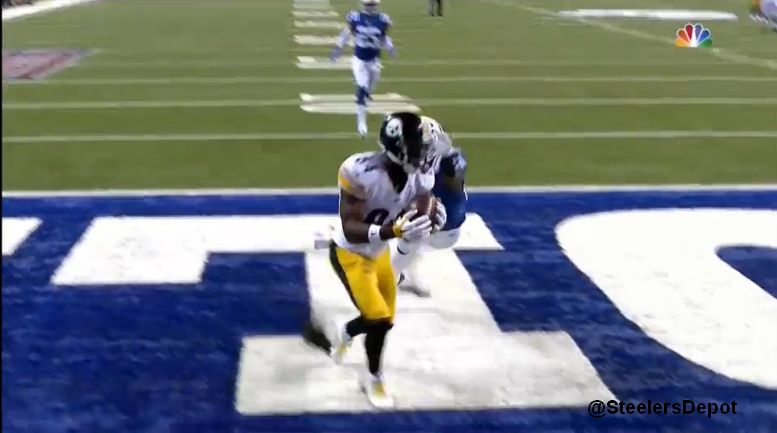 And here’s the full thing.

It’s two great plays and reads by Brown. There’s so much nuance in his routes, the ability to slightly adjust his stem without losing speed, and then explosion when he finally makes a decision. It’s really incredible to see the two. I’m guessing Davis thought Brown was going to convert his route to an out route again and tried to sit on it.

Brown noticed it, changed his stem, Ben Roethlisberger read it, and made one heck of a throw. It honestly might be one of the best plays the two have made together all season long.