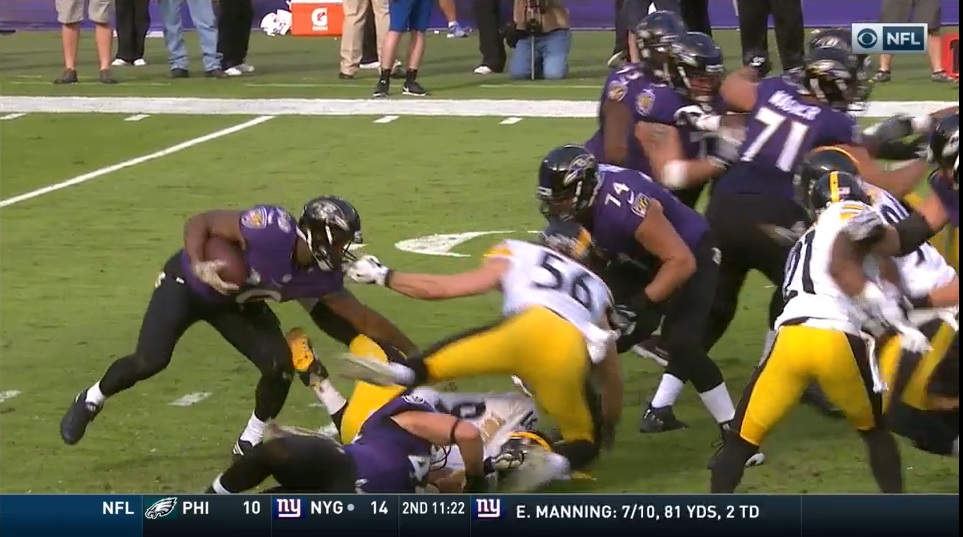 In Sunday’s loss to the Baltimore Ravens, Pittsburgh Steelers outside linebacker Anthony Chickillo led the team’s position group in total snaps played with 42. During his weekly interview with Missi Matthews on Steelers Nation Radio, defensive coordinator Keith Butler explained why Chickillo led all outside linebackers in total snaps played against the Ravens.

While Chickillo did register 6 total tackles against the Ravens to go along with a half a sack and two quarterback hits, it’s important to add context to those stats. For starters, the half a sack that Chickllio shared with inside linebacker Ryan Shazier came with 2:18 left in the game and was pretty much a gimme as Ravens quarterback Joe Flacco just gave himself up on a 3rd and 9 play right at about 3-seconds after the football was snapped.

As for Chickillo’s other 6 total tackles in the game against the Ravens, 5 of them came more than 6 yards down the field and two of those came after gains of 30 and 14 yards. Additionally, Chickillo was also penalized 15 yards for a facemask with 11:05 left in the second quarter. Fortunately for the Steelers defense, the Ravens couldn’t capitalize on that free yardage.

With all that above context now out of the way, until fellow outside linebacker Bud Dupree finally returns to action, Chickillo is probably the Steelers best option when it comes to the left outside linebacker position. With that said, the Miami product needs to start making more impactful plays instead of registering hollow sack and tackle numbers.

This Sunday in the Steelers home game against the Dallas Cowboys, Chickillo will likely play quite a few snaps against their right tackle Doug Free. If the Cowboys have a weak link on their stellar offensive line, it’s probably Free so hopefully Chickillo can take advantage of that matchup.